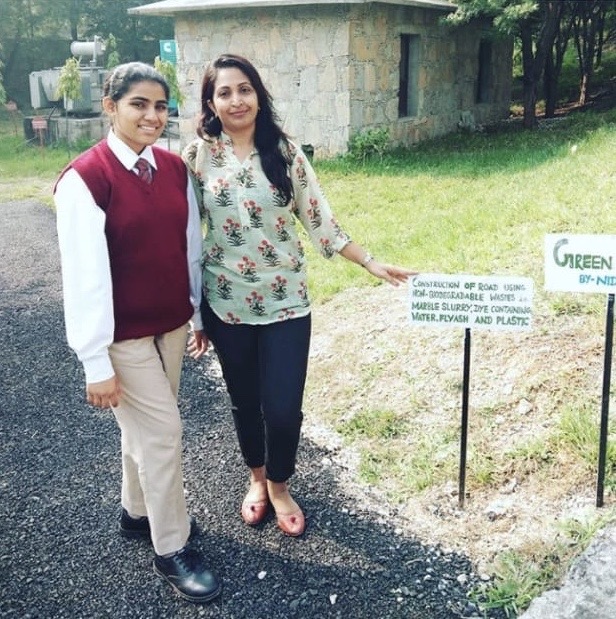 Jaipur, January 6, 2020: Shriyans Bhandari, the CEO Greensole and Director Heritage Girls School,  shares an exceptional project by 16-year old, Nidhi Kalal, a Class XII student of  Heritage Girls School, Udaipur, who utilised non-biodegradable materials to construct a road. The road was constructed utilising waste materials which would have been landfilled. She has received acknowledgement by the Ministry of Road Transport and Highways. She has also applied for a patent for her innovation.

Read the implementation report of this incredible achievement by Nidhi Kalal:

When I was a child, someone in school asked me what my solution would be for plastic pollution in and around my surroundings. I did not answer then. While returning home from school, I saw a road construction taking place on a particular stretch. The next day in school, I went to the person who asked me the question saying that I will bury the plastic under the road while it is being constructed.

A few years later, I came to Udaipur for the first time. I was thrilled to see such a beautiful place. But as soon as I reached the outskirts, I was deeply disappointed to see that all the hills were eerily covered in something white. When I asked my father what it was, he told me that the hills were actually covered with marble slurry, waste from the marble mines. He told me that it is non-biodegradable and is very dangerous for the flora and fauna present there. I realised the seriousness of the situation and what a health hazard it is for everyone.

I read many articles in the newspapers regarding the nuisance created by plastic. I was taken back to that childhood memory, and things just fell into place. A light-bulb moment struck me. Roads can be constructed with these two things. I started researching about this. During my research period, I came across one more non-biodegradable waste – fly ash (a by-product of coal combustion), which is also very harmful to the environment.

One day, as I was talking to my Chemistry teacher, Dr. Mamta Lodha, she told me about her research on a non-biodegradable material dye, containing water, which is a waste product from the textile industry. I then realised that all these waste materials could be combined to construct roads. And one of the reasons I want to construct a road is because I have read many articles where lives have been lost due to potholes. I shared the idea with my teacher. We started researching the chemical and physical properties of these materials. I talked about this with my Principal, Ms. Tulsi Bhatia. She praised my idea, inspired me to continue working on it, and suggested me to construct a road in the school premises as an experiment and for observation.

I started constructing the road in the school premises with the following mechanism. The first layer is a mixture of concrete and sand followed by the second layer, which is a mixture of marble slurry, fly ash and the dye containing water and plastic. This is followed by a layer of coal tar, and finally, a layer of asphalt in which plastic is mixed while heating up the asphalt. We replaced potable water with the dye containing water, thus saving water and a huge amount of waste. And plastic is used twice. The cost of construction is greatly reduced as every material used is waste, which would have just gone to a dumping yard. All these materials have been given to us free of cost. Plastic within the layers will reduce the occurrence of potholes during the rainy season. 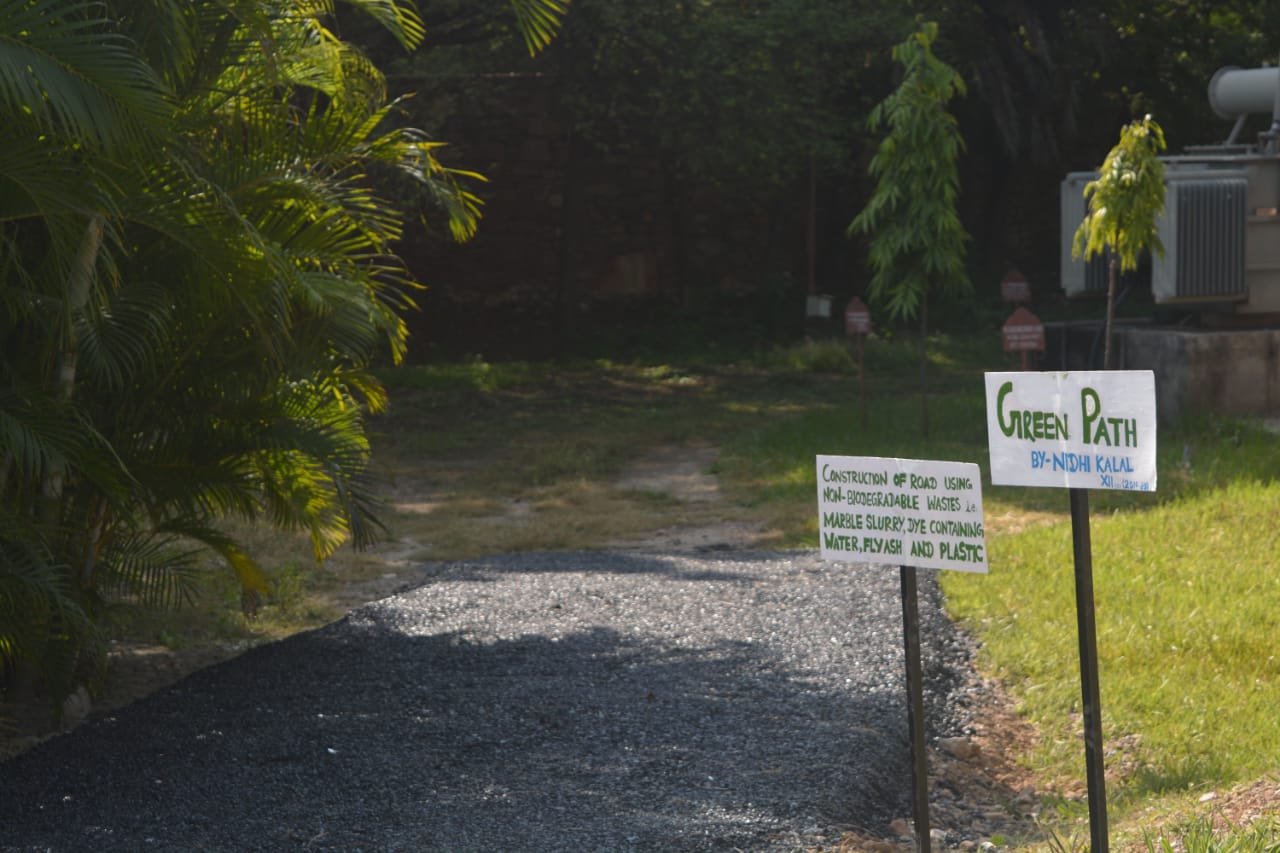 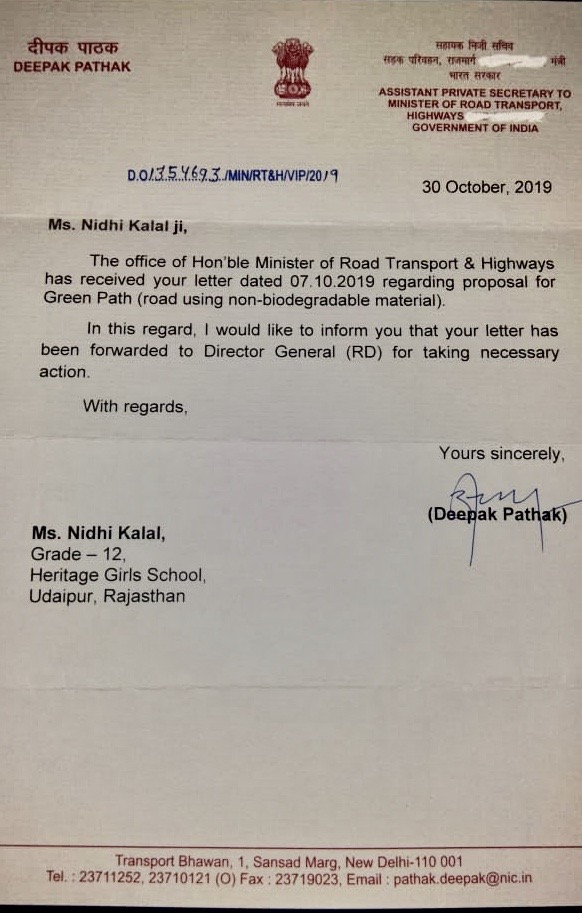 I constructed the road in October and named it, “GREEN PATH”, as this will help in removing non-biodegradable wastes and will make the surroundings eco-friendly. The main objective of this ‘Path” is to project it as a  sustainable ‘dumping yard’ for waste materials. Fortunately, the road is in regular use and is still intact. This project has been proposed to Mr. Nitin Gadkari, the Union Minister of Road Transport and Highways. We have received a letter stating that it has been forwarded to the Director-General, Road Development, for further research. We have also sent the project to The Organization of Patents, New Delhi.

I have hope that my project will be a boon to the nation. I want to do my bit in saving the environment.