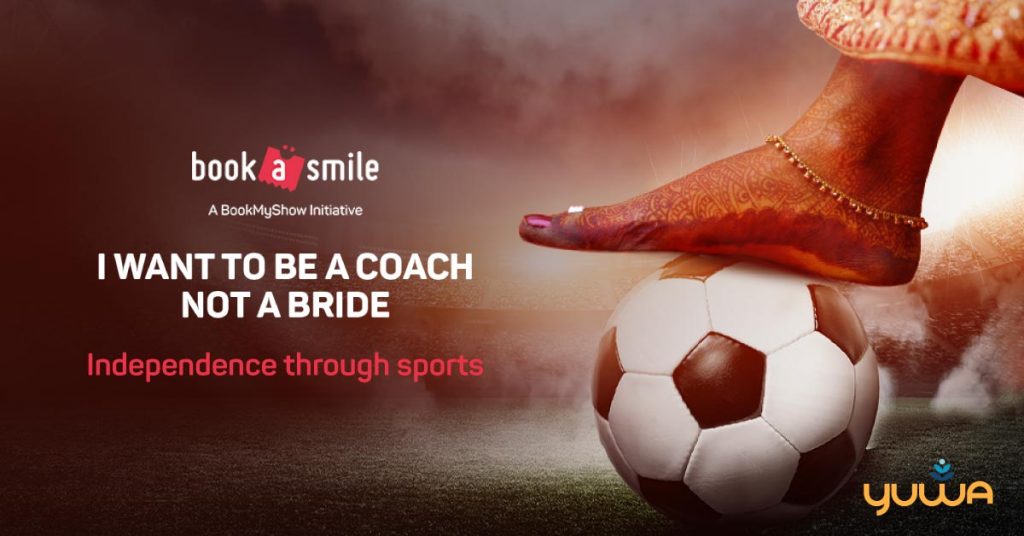 National: As India readies to celebrate its 75th Independence Day on Sunday, BookASmile, the charity initiative of India’s leading entertainment destination, BookMyShow, in collaboration with Jharkhand-based NGO – YUWA, has conceptualised a new campaign to highlight the role of freedom through sports titled ‘Independence Through Sports’. Set to be launched in the format of a digital video film on the eve of our Independence Day on August 14, BookASmile and YUWA are furthering their work in encouraging and empowering young girls to explore the realm of sports through this campaign.

In rural Jharkhand, young girls are forced to drop out of school and become child brides and work to support their families. BookASmile and YUWA have been working at the grassroots to uplift the lives of these girls by breaking the shackles of such social evils and providing them with an equal opportunity to discover their true potential through sports.

Since 2009, YUWA has demonstrated an unwavering commitment to creating safe and quality programmes creating historic sports victories for underprivileged girls across inspiring millions across India and the world. In 2019, YUWA’S impact was internationally recognised when they received the Laureus Sport for Good Award in Monaco — the most prestigious award in sports development.

Since2015, BookASmile supported YUWA to build a grassroots Football For Empowerment programme working together to train young women from tribal and low economic backgrounds as coaches and leaders. With unwavering economic support from BookASmile over the years that enabled YUWA to undertake steadfast support and training for these beneficiaries, these coaches have won several accolades including having competed in the Donosti Cup, Spain in 2016, kayaked in Alaska and climbed Mount Baker in 2018 and 2019 respectively, travelled for the FIFA Women’s World Cup to compete in Festival 19 and won the Guinness Record for playing in the world’s longest non-stop football match in Lyon, France in 2019, and completed coaches training at Real Sociedad in Spain in 2017 and 2018.

The digital film, ‘Independence through Sports’ for Independence Day, has been developed and produced by Black Sheep Productions, a well-known film production team in Ranchi. The film traces the journey of the impact that the football programme, executed by YUWA and supported by BookASmile, has made in the lives of the girls through their own account of their existing circumstances. The film follows the lives of the girls before and after the football programme and the opportunity it gave them to dream big, play fiercely and hope for a better future.

Commenting on the initiative, Farzana Cama Balpande, Head – BookASmile said, “We are delighted to launch this campaign through the digital film- ‘Independence through Sports’ in association with our long-term partners YUWA. In many parts of the country, girls are taught to fit in or forgo their education and the opportunity for a better, empowered life. BookASmile and YUWA aim to challenge these social conventions through the power of sports to mentor and train girls to stand out and be the best version of themselves. Through our journey as partners over the years, together we have been able to create a positive impact in rural Jharkhand, enabling hundreds of girls to break out from age-old, stereotypical misogynistic practices and reach their true potential.”

Franz Gastler, Co-founder & Executive Director, YUWA said, “When I left my corporate job in Gurgaon in 2008 and moved to rural Jharkhand, I never expected I would stay for 12 years.  I did not expect I would meet a group of kids so hungry for a chance to change their futures. I would not have believed that from our first football team of 12 girls we would grow to 600 playing every day, that we would have what I believe to be the largest cadre of female football coaches in India, or that these young women would travel the world to compete, train and speak about their incredible journey.  The YUWA girls’ achievements are simply extraordinary, and we could not have done it without the support and sincere dedication of the team at BookASmile.”