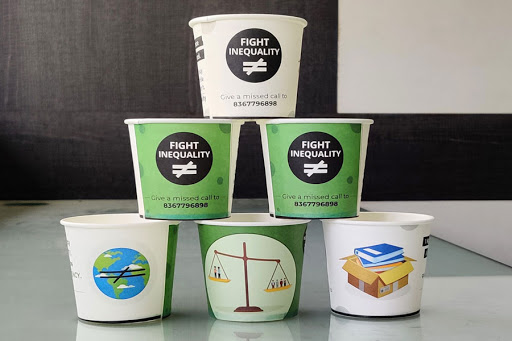 India, February 6, 2020: CupShup, an independent advertising start-up, has joined hands with Oxfam India in their fight against inequality. Rights group, Oxfam, recently released a report ‘Time to Care’ that showed that global inequality is shockingly entrenched and that India’s richest one percent hold more than four times the wealth held by the bottom 70 percent of the population.

Through CupShup’s wide network, Oxfam aims to reach out to Gen-Z to create awareness regarding wealth inequality in India and also encourage them to join the movement.

The campaign, primarily led in the national capital region, is also being supported by Nukkad Nataks or street theatre in outdoor public spaces that centre around inequality and how it is affecting the common man. The campaign is also being promoted on the radio. The team distributed cups in colleges and universities across the Delhi and NCR region.

The cups have interesting taglines printed on them highlighting inequality and how it is fuelled, which would help garner the attention of the consumer, and in turn, motivate them for a call to action.

Commenting on the campaign, Sidharth Singh, Co-Founder, CupShup, said, “The ‘Time to Care’ report has highlighted the root of major economic issues that a common man faces in our country, and we are honoured to be supporting Oxfam in this noble cause to bring awareness. Through cups and Nukkad Nataks, we are also hopeful to create awareness on unpaid and underpaid work that women undertake in India and globally.”

“The action was part of the mobilisation in Delhi by the Fight Inequality Alliance in India. The current rate of inequality in India is unacceptable and it is time for citizens across the country to stand together in support of a fairer, more equal India,” said Anjela Taneja, Lead Campaigner Inequality, Oxfam India.