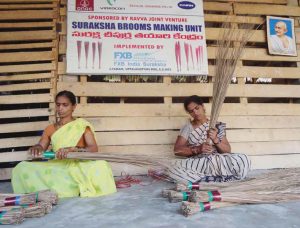 Cairn India’s Initiatives are Transforming Lives of Many Communities in Rajasthan.

Skewed gender ratio and gender inequality is a hindrance to development of the society and ultimately, the economy. The corporate world is waking up to this fact, and Cairn India Limited, one of India’s largest oil and gas companies, whose major oil fields are located in the Barmer district in Western Rajasthan, has taken up some of the most challenging tasks of empowering rural women in the district.

In India, women empowerment has different connotations in rural and urban   areas.   The  socio-economic empowerment of women is a pre-requisite for development of the society. Cairn India identifies and understands the importance of skill development and access to employment opportunities. It is committed to enhance the social status of rural women in its operational areas. The company has been consistently working towards initiating programmes for regular mentoring and creating opportunities for their overall socio-economic enhancement.

In alignment with the government’s Skill India initiative, the Cairn Enterprise Centre (CEC) has been providing skill training, career counselling and linkage to employment opportunities to over 12,000 youth as well as women, since 2007.

Barmer District with its low literacy rate, lack of quality education and poor community awareness are contributing factors to unemployment, poor health and low income in the region. While Cairn India has triggered economic growth   in   the   region   through  its operations, it has also enabled large scale community development to ensure inclusive growth.

In alignment with the government’s Skill India initiative, the Cairn Enterprise Centre (CEC) has been providing skill training, career counselling and linkage to employment opportunities to over 12,000 youth as well as women, since 2007

Through the Cairn Enterprise Centre (CEC), various income generation activities have also been introduced to empower women. CEC also provides financial support to help these women start their own businesses. The company has also established the Cairn Centre of Excellence (CCOE) in Jodhpur to provide advanced training in vocational courses pertaining to Welding, Renewable Energy (wind and solar), Automobiles and Retail, engaging German firm TUV Rheinland to deliver the courses. The residential institute, spread over 12 acres, has been acknowledged to have some of the best infrastructure in the country by important dignitaries and officials who have visited; and placements received by students have been noteworthy.

Hailing from a conservative family, she aspired to carve her own identity at a very young age. CEC helped Chanchal along with other youth of Barmer by training them for the HDFC Bank entrance test, one of the largest private banks in India. In a month-long course, they were taught aptitude, numeric ability and English proficiency and went through personality grooming to prepare them for corporate life. Post training, Chanchal was among the successful candidates selected by HDFC. She has become a role model for many girls her age in Barmer.

Masonry Training: In a move from the usual vocational training courses for women such as sewing or craft-making, 50 women were chosen to be trained as masons. The training proved to be a great boon for Soni Devi, a 28 year old widow of Bhimda village in Barmer. As a value addition, these women received education through a special provisional literacy programme specifically designed for them. They are now able to handle some amount of paperwork themselves, have become financially independent and are empowered to face new challenges. Today, Soni and other women masons are helping build toilets as part of the Swachh Bharat Abhiyan.

Surasaniyanam is a remote village in East Godavari district in coastal Andhra Pradesh. Absence of requisite education and skills resulted in unavailability of sustainable  livelihoods, increased migration and socio-economic challenges. The Ravva JV onshore terminal, operated by Cairn India, is the village’s first and only tryst with industrialisation. As part of its endeavour to make a positive difference in the lives of the local community, Cairn and Ravva JV has been actively involved in implementing community development projects in and around Ravva operational area. These initiatives have touched the lives of people across different strata of society by creating sustainable livelihoods.

Suraksha Broom Making: This is another project undertaken by Cairn India for upliftment of women. It started in December 2014 with six women as direct beneficiaries. Today, about 120 poor households from the project area are involved in this broom-making unit as raw sticks suppliers.

The Suraksha Broom and Suraksha Agarbatti making units have benefitted community members in villages around Cairn India’s operational areas in Ravva. The project has helped women, who are the driving force of this business, to save money, live a better life and help educate their children.

Barmer Unnati: Farmers in Barmer struggle to earn enough money to support their families. They raise a limited variety of crops and rarely introduce new innovation. Cairn’s Barmer Unnati project, in partnership with Techno Serve, is working with farmers  to  introduce  new  crops and innovate new livelihoods. Under this project, Leelawati, a village woman was introduced to oyster mushroom cultivation. She sold 45 kg packed mushroom under the brand ‘Barmer Unnati’ to local hotels, restaurants and markets and earned a profit of Rs. 3130 within a period of 60 days. Today, Leelawati feels empowered and elated that she is able to support her husband and contribute towards the economic development of her family.

Project Rachna: Special focus has also been given to improve health, sanitation and general awareness among women. Project Rachna or Reproductive and Child Health Nutrition & Awareness and the single point agenda of implementing this project is to ensure woman and child well-being. The project is being implemented in three blocks of Barmer district – Baitu, Sindhari, Dhorimanna. The project’s goal is to contribute to significant reductions in maternal and infant mortality, to improve menstrual hygiene and reproductive health of adolescent girls and women in the district. Under this programme, Cairn India has helped the local SHG group to set up two sanitary napkin production units in Barmer. Each of the manufacturing unit is operated by a local women’s SHG who have been trained to operate the machinery and familiarised with the production process. At present, each woman can earn up to Rs. 50 per day and an average daily production of 750 sanitary pads per day besides generating awareness on importance of better menstruation hygiene management among adolescent girls and women.

Contributing to the Government of Rajasthan’s initiative of Beti Bachao Abhiyaan, Cairn India has introduced a one-of-its-kind campaign to celebrate the birth of a girl child around the operational areas. Under this campaign, the company presents a “New Born Baby Kit”  to  parents  of  baby  girls  born  in government hospitals and institutions. This kit consists of a clean towel, two sets of dresses, socks, toys, a mosquito net, and an immunization checklist. What makes the kit unique is the message behind the initiative that a baby girl brings happiness to the family. The campaign allows increasing awareness on the importance of institutional delivery which will positively impact Infant Mortality Rate (IMR) and Maternal Mortality Rate (MMR).

Cairn India, through various unique initiatives, aims to encourage more women to overcome social barriers and chart out a new future for them and their families.

OASIS IN THE DESERT

Barmer district, part of the Thar Desert, is said to be the most densely populated arid zone in the world with a population density of  approximately  90  people per square km where temperatures go up to 50°C during the summer season. According to the World Economic Forum 2009 Report, the region has the lowest water endowment in Rajasthan. As part of its holistic sustainability initiatives, Cairn India has initiated the Jeevan Amrit pilot project in collaboration with the Public Health and Engineering Department  (PHED), Cairn India, through various unique initiatives, aims to encourage more women to overcome social barriers and chart out a new future for them and their families safe drinking water to the communities in the districts of Barmer and Jalore through the establishment of Water ATW (Any Time Water) kiosks. Water purification plants will be established and maintained to provide clean and safe drinking water to more than 800 villages in Barmer. The initiative will involve setting up of 333 small scale ATW plants (1000 – 3000 litres per hour capacity) over the next three years to provide clean and safe drinking water. ATW kiosks have been established at a number of access points and the communities are  provided with pre-paid smart cards   with   which   they   can  access water at their convenience.

A key feature of the Jeevan Amrit project is that it is a community-managed initiative, giving members a sense of ownership; the operators are chosen by a Village Water Committee from among the local community. This project will    result in rural employment opportunities, which is in line with the World Water Day theme of 2016 ‘Water and Jobs.’ Besides operations and maintenance, indirect employment will be generated in water distribution, large scale civil works, plumbing as well as electrical.

The project is being implemented with support of agencies such as Water Life and Fontus in Barmer. Around 70 units have been implemented this fiscal year. Having received extremely positive community feedback, Cairn India is now increasing the scale and scope of the project substantially.

Cairn India has also partnered with a few local entrepreneurs to run a ‘water on wheels’ – Jal Rath, which fosters a spirit of rural entrepreneurship.