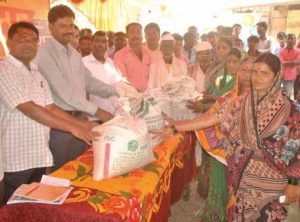 The Marathwada region of Maharashtra is reeling under the worst drought in recent years. The massive crop failure has turned this region into a graveyard, with farmer suicides already crossing the 600 mark. As much as 84 percent of Maharashtra’s agriculture is rain-fed. The region normally receives around 780 millimeters of rainfall during the monsoon. The number has dwindled to 259 this past monsoon. With persistent shortfall of rain in Maharashtra, water storage in the State’s dams has hit a three year low. Facing its third successive year of below normal monsoon, farmers and their families who feed billions, are the ones bearing the brunt of drought resulting in lack of consistent income necessary for their subsistence, including proper food and water.

With an objective of extending help to drought-affected farmers and their families, Dainik Bhaskar Group initiated ‘Annadaan’ (Food grain donation) campaign across 36 cities in 10 States between 28th September and 20th October 2015. Through this initiative, an appeal was made to the citizens to contribute their bit by donating food grains as a token of support towards the drought-hit farmers who are deprived of food because of the three consecutive devastating droughts.

Under the aegis of this initiative, concentrated efforts were made in close coordination with relevant stakeholders including local Panchayat Raj Institutions (PRI) members, NGOs and volunteers to distribute in packets of one, two, five, ten kilograms, amongst the drought-hit farmers and their families in the Marathwada region. Beneficiary cards and registers were also maintained to keep track of the food donations thereby removing any duplicity. The initiative was rolled out in 36 cities of Madhya Pradesh, Chhattisgarh, Rajasthan, Jharkhand, Bihar, Chandigarh, Punjab, Haryana, Gujarat and Maharashtra.

Through this drive, Dainik Bhaskar Group successfully collected 300 tons of food grains within a span of 20 days and further distributed it among 15,000 families through a cluster of distribution centers set up across 125 villages. The distribution was flagged off by the Governor of Maharashtra, Mr. C. Vidyasagar Rao. Out of the 300 tons collected, 260 tons from seven States were accumulated and transported to the drought-hit villages of Aurangabad, Ahmadnagar, Jalna, Beed, Usmanabad and Latur districts for the purpose of distribution amongst the impoverished farmers thereby making their ‘Diwali’ even more meaningful. The remaining 40 tons from three States was distributed locally to those in need.

In alignment with our organizational vision of enabling socio-economic change, we firmly believe that farmers are an integral stakeholder of our society and when they are struggling for their subsistence. It is our moral responsibility to help them. We are really thankful to all those who came forward, contributed and extended their help through this initiative towards our farmers and their families during this challenging time–Vinay Maheshwari, Senior VP, Sales and Market Development & Brand Marketing

Apart from driving ‘Annadaan’ through print ads and edit write-ups, we also tried to engage different stakeholders of the society including our readers, employees, academic institutions, government and NGOs to drive behavioral change towards this noble cause of donating food grains. We are happy that we were able to extend our product philosophy of leading ‘No Negative Life’ through this initiative as we can leverage our strength to bring positivity in the lives of the needy–Vikas Singh, Associate VP, Brand Marketing

At Dainik Bhaskar, corporate social responsibility is not merely compliance; it is a commitment to undertake initiatives in the areas of environment sustainability, education and other community development initiatives. Over the years, the Group’s endeavor is to be a catalyst in driving the much needed social economic change of our nation.