Mumbai, August 1, 2018: Mahindra Group, along with Project Nanhi Kali, aims to dispel the misconceptions around girl child education by taking on a fresh view for the phrase with the campaign #LadkiHaathSeNikalJayegi. A number of surround activities are planned to spread the word and create a movement to support the cause. These activities will celebrate women who have achieved greatness by taking that crucial first step. These women will be both from outside Mahindra, as well as inspiring stories of our own Nanhi Kalis.

Commenting on the purpose and genesis of the campaign, Sheetal Mehta, Senior VP – CSR and Executive Director, K.C. Mahindra Education Trust, said, “With over two decades of experience in educating girls, Project Nanhi Kali has sufficient evidence that education is the only tool which enables girls to rise from a life of poverty, and go on to live a life of dignity. The objective of this campaign is to change attitudes towards girls, by giving a positive perspective to the phrase #LadkiHaathSeNikalJayegi. We hope that every Indian citizen will not only view this film, but also help spread awareness and contribute to this worthy cause.”

“Mahindra is a socially responsible and trusted brand, but with our RISE philosophy, we not only want to do good in the community, but also aim to inspire others to do good in order to drive societal change. This is the heart of Mahindra’s Rise for Good campaigns. With the #LadkiHaathSeNikalJayegi campaign, we’re turning this phrase on its head into a message of positive empowerment for girl child education and their ensuing success,” said Vivek Nayer, Chief Marketing Officer, Group Corporate Brand, Mahindra Group.

The Mahindra team conducted a detailed social media listening exercise on social issues. Not surprisingly, girl child education was among the most talked about issues online. Furthermore, focus group discussions highlighted that: 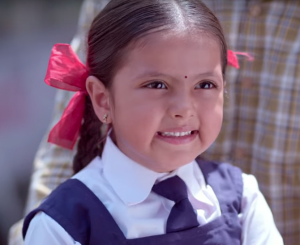 The film has been conceptualised keeping these insights in consideration. A semi-urban setting was chosen for the film to ensure relatability, given that these beliefs exist not just in rural India, but also in cities. It is through a conversation between a girl and her father that the prevalent mindset is challenged by providing a new perspective to Ladki Haath Se Nikal Jaayegi.

The film was conceived and scripted by FCB Interface. The Chief Creative Officer, from FCB Interface, Robby Mathew, said, “This film is an ode to the unsung heroes, who reject our society’s patriarchal mindset and encourage their daughters to fly. It is a celebration of a girl child’s dreams and her father’s determination to make it happen. It changes the meaning of this often-used phrase – Ladki Hath Se Nikal Jaayegi – and instead uses it to make a case for putting her destiny back into her own hands.”

Project Nahi Kali, since 1996 has empowered over 350,000 girls; including 153,999 girls in this past year alone. This massive undertaking was made possible thanks to over 4,560 Community Associates who tutor our Nanhi Kalis for two hours every day, six days a week through the year, working across 5,262 Academic Support Centres in remote, tribal and rural pockets, as well as urban slums in 11 States of India. The objective of the campaign is to increase awareness and encourage more and more people to join the movement.