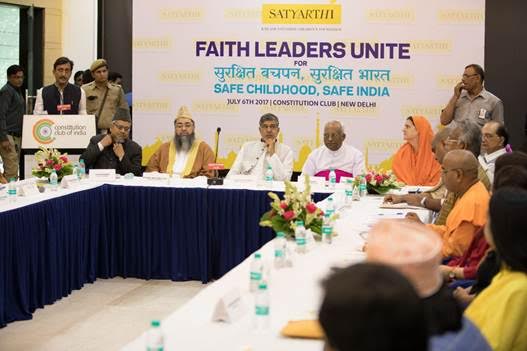 Leading the roundtable discussion, Nobel Peace Laureate and Child Rights Activist, Kailash Satyarthi said, “Children are always the worst victims of all forms of violence; sexual abuse is among the gravest and is growing at an alarming rate. This is a crime, an evil and the reflection of societal sickness hidden beneath the widespread silence of social taboo. It is the moral obligation of all faith leaders to help break this silence. Protecting God’s children, I believe, is the most powerful act of worship.”

Religious leaders and faith communities are the largest and most organised civil institutions in our society, claiming the allegiance of billions of believers and bridging the divide of race, class and nationality. More than any other civil society representatives, faith leaders have the experience of establishing and working with local, regional and international partners. Their influence can contribute effectively to ending violence against children. This roundtable seeks to bring all faith leaders together under the same roof who will commit to supporting the cause of ending violence against children and mobilising their followers to join and pledge for this cause.

During the discussion, Salim Engineer – Jama’at-e-Islami Hind said, “Violence against children is a very important issue in this country. We will support you, the cause and the campaigns, wherever you will go.”

“Be assured of our support to the campaign, the Catholic Church supports you as the cause is a very noble one”, said Archbishop, Anglican Church of India.

Room to Read India: 250 Million Children Still at Home, But Learning Should Not Stop

Room to Read India: 250 Million Children Still at Home, But...