The first ever Rashtriya Swayamsiddh Samman, a unique initiative launched by JSPL Foundation in 2015 to identify, reward and recognize grassroots leaders and social innovators in India saw nine individuals and 10 organisations from across different sectors receive the prestigious award on January 14, 2016 in New Delhi.

The winners in the Individual Sategory have stories that are truly inspirational. Some of the winners include Bhapkar Guruji, the Mountain Man from Maharashtra who has built a 40 kms path cutting across seven hills; the Glacier Man of Ladakh (Chewang Norphel) who has built artificial glaciers and solved the problem of water in the dry mountainous area; Gujarat farmer (Patel Genabhai Darghabhai) who brought pomegranate farming to Banaskantha, and Indore couple (Gyanendra and Monica Purohit) who successfully convinced the government to open a model deaf and dumb friendly police station, a first in India.

Winners in the Organisation category include Action for Protection of Wild Animals (APOWA’s) whose Mangrove Conservation Project has directly benefitted some 24,000 people from 42 villages in Odisha; Rescue Foundation from Maharashtra that works towards rescue, rehabilitation and repatriation of victims of human trafficking from India, Bangladesh and Nepal; Rural Health Care Foundation that runs 10 healthcare centres in West Bengal; and Sports Coaching Foundation (SCF) that aims to identify young talent (especially among the less privileged) to groom them into promising sports stars of the future.

Says Ms. Shallu Jindal, President, JSPL Foundation, “People from the grassroots level rarely ever receive recognition for the good work done by them. It is this vacuum that JSPL Foundation strives to fill by initiating a legacy from this year by the name of Rashtriya Swayamsiddh Samman to recognise and nurture talent from the grassroots level from across the country. It was heartening to see that Rashtriya Swayamsiddh Samman elicited 358 entries in its first year, an indication of the rich talent in our country.” 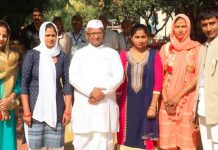