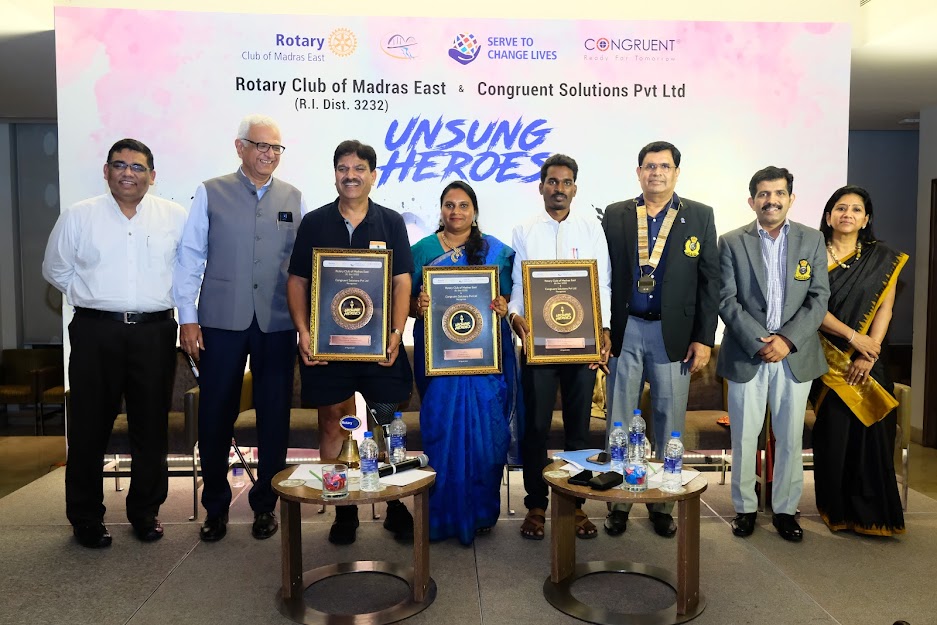 Chennai: Rotary Club of Madras East and Congruent Solutions have joined hands to felicitate individuals who have contributed to society. These unsung heroes were honoured for their achievements at an award ceremony held recently at Hotel Raintree, Chennai. These heroes were chosen to acknowledge their contribution to society, to making a difference in people’s lives through their service and motivate them to continue on their path.

The ‘Unsung Heroes’ project was initiated by the Rotary Club of Madras East in 2016 and was conceptualized by its Ex-President, Rtn K Ananth. The idea behind this initiative was to recognise and identify those who have immensely contributed towards shaping the community. There was a need to support and encourage these self-made individuals who have faced life’s toughest challenges and have put service above self. Their inspiring life stories are a source of motivation for society.

Speaking on this initiative, Rtn M Srinivasa Rao – President of RCME, said,”We, at RCME, wanted to identify those heroes amongst the common man who are equally deserving of the accolade but whose contribution to our community remains unknown. These heroes keep stretching beyond their comfort zone, face challenges with a smile, have put service above self, and their inspiring life story is a source of motivation to our community.”

Commenting on this partnership with RCME, Balaraman Jayaraman, President and CEO, Congruent Solutions, said, “Congruent Solutions has been partnering with the Rotary Club of Madras East over the last few years in recognising ‘Unsung Heroes’ in the community around us – people who, by their sheer determination and will power, have moved mountains far beyond what their profile is expected to, as per conventional norms. These ‘Heroes’ also stand as a testimony to the power of the human spirit and serve as examples to the rest of the society that one should not get bogged down by one’s circumstances and stop dreaming. These individuals have not had any significant visibility in the community but deserve that recognition if only to inspire the rest of us.” 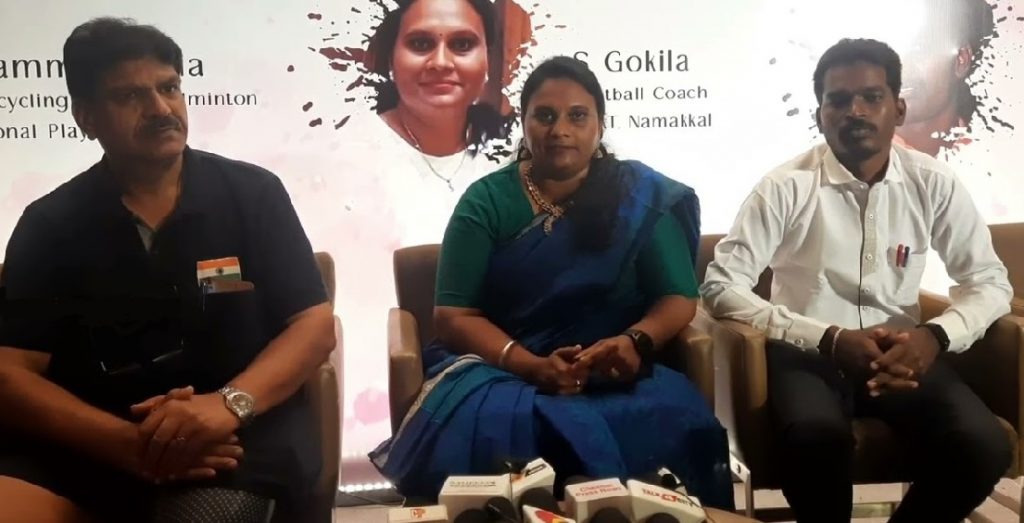 In mid-2021, he met with a road accident. Many said he was beyond redemption. But within 120 days of the accident, he represented our country at the international sports para-badminton tournament in Uganda. Within seven months, he participated in the para-cycling road race. He cycled his way to Bombay in just five days. A mechanical engineer by profession with 40 years of work experience, he has involved himself in making radiography equipment for cancer patients. After taking the required training, he now aims to conquer Mount Everest and would become the 8th specially-abled person to do so.

He loves to experiment with improvements in manufacture and is currently involved with plastic injection molded parts. Training is another favourite passion of his and despite all the obstacles he has faced in life, he is capable of inspiring all who get in touch with him, however small the duration might be.

Coming from a poor agriculturist family background, Kokila happens to be the first graduate in her family. Having done her schooling at St Joseph’s Matriculation school, her attention was drawn toward football at a very young age. This prompted her to become a very skilled player and trainer in this sport. Turning her attention to full-time coaching, she has skilled hundreds of youngsters, taken more than 50 school children to the national level representation and raised 5 of them to attain international fame. She does not intend to stop with just coaching. She hand-holds them until they gain financial independence and social awareness. Through her service and football, she endeavors to have representation for women at the state level as well as the National level. She firmly believes that this will enable empowerment for these girls and women in the coming days.

BR Arumugam was born in a low-income family in Pakkam village near Chennai. With poverty and shortages around him, he worked part-time to pay for his education. He completed B.Ed, M.Sc and MSW. His passion for planting trees started inhis school days and it sowed the seeds for service activities. On service journies, he met various people and witnessed their lives, and these incidents left a deep mark in his mind and he decided to improve the standard of living for the villagers and give free education to children. Over the years, 15 tuition centers were set up in 15 villages. Adding to this was the objective of building an educated society, and 850 children were given education in private and government schools. 114 houses were built for the homeless people with proper documentation. To sort out the problem of earning, self-employment campaigns were laid out for 300 families who benefited from it. Another main issue for the poor people was medical support. Major operations and minor surgeries have been done over 10 years for 1500 poor people around the Thiruvallur district.

Evening educational special classes are being conducted in 15 villages and this programme, 661 students are being educated. Moreover, 130 women were given Training in Tailoring courses with Certification, 1500 people were helped with Free Medical Treatment, including 25 people who have undergone major surgeries. About 250 children below the poverty line have been made to study in Matriculation schools, free of cost.

He wishes to address various needs in various villages in the coming days, like houses with toilets, laying roads, solar rooftops, terrace gardening, tuition centers, etc. He plans to build a free school for tribal and poor people without religious bias.