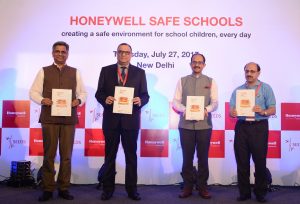 The study identified potential risks related to natural and man-made disasters, and revealed startling facts about the lack of awareness and involvement from parents:

Speaking at the launch, Manu Gupta, Executive Director, SEEDS, said, “We are pleased to partner with Honeywell India to launch a pioneering school safety and disaster risk reduction programme in the most vulnerable areas of Delhi. Our study highlights that often high potential risks are not recognised as imminent threats, and there is a need to create awareness among children, parents, teachers, and civic authorities to mitigate the impact of disasters.”

As the national capital and a busy landlocked city, Delhi’s most visible and talked about risks are fog, smog, epidemics, and accidents. Yet, the physical, geological, and spatial setting of the city also makes it vulnerable to many other natural and man-made risks. Delhi is at high risk from two natural hazards that could lead to major disasters – earthquakes and floods. However, since no significant flood or earthquake has occurred recently, there is low recall and awareness about associated risks. This makes inhabitants more vulnerable as there is no public memory or appreciation that emergency preparedness and response can save thousands of lives and valuable assets.

Vikas Chadha, President, Honeywell India, said, “As a global technology leader in safety, we transform the way people live, work, and travel every day. It is a natural extension to bring our understanding of home and building safety to bear on communities we work and live with. It is also a natural partnership with SEEDS, an NGO, globally recognised for their subject matter expertise in all three steps to disaster mitigation – preparedness, response, and recovery.”

The Honeywell Safe Schools programme involves structural assessment of each school by engineers and architects; evaluation of risk perception among children, teachers and parents; and examination of preparedness in the face of any natural or man-made disaster. Experts from SEEDS work closely with children, schools, and communities to train them in disaster-preparedness and risk-reduction. This is done through interactive sessions, mock drills, peer-to-peer learning, and non-structural mitigation of risks.