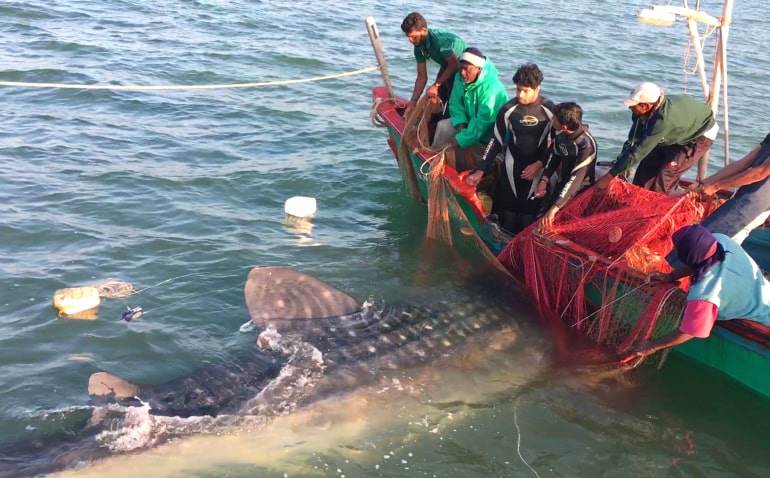 Mithapur: Tata Chemicals through its Save Whale Shark Campaign has saved over 850 of these endangered species to date in the Saurashtra region along the coastline of Gujarat. This initiative of Tata Chemicals, Wildlife Trust of India (WTI) and the Gujarat Forest Department has garnered extensive support from the fishing communities of Gujarat resulting in a decline in cases of poaching from around 600 in 1999-2000 to zero in 2021.

As a part of this campaign, Tata Chemicals organizes an array of activities every year. To commemorate the 14th International Whale Shark Day, a seminar was organised in Mithapur. During the event, two decades of conservation partnership, milestones achieved, challenges faced, and the road ahead were discussed. B.M. Praveen Kumar, Manager & Technical Head – Marine Projects, WTI; Prof. B. C Choudhury, Executive Trustee of WTI; Agneeswar Vyas, IFS, Dy. Conservator of Forests (SF), Dept. of Forests; Satyajit Roy, Head – Operations, Tata Chemicals were present at the event amongst others.

In yesteryears, the likes of Shri Morari Bapu, a well-known religious leader, were also roped in to make it a people’s campaign. Several educational activities were carried out to raise awareness about this campaign. Twenty signboards for whale shark conservation have been installed at fishing harbours on the Gujarat coast.

Talking about this initiative, R. Nanda, Head-HR and CSR, Tata Chemicals said, “Corporates through CSR can do a lot for our environment. This campaign is a reflection of Tata Chemicals’ commitment to environmental conservation. Designed to make the community a stakeholder in our endeavour to save this whale shark, this initiative has ushered a significant behavioural change.”

The concerted efforts of the company and the partners have resulted in the whale shark becoming the second wildlife pride in the State of Gujarat, after the Asiatic lions and seven coastal cities in Gujarat, including a non-coastal city, Ahmedabad, have adopted the whale shark as their city mascot. The whale shark conservation project has sensitised over 50,000 fishers and 100,000 coastal students through a campaign awareness drive to inculcate the message of conservation.

The project has been represented in the International Whale Shark conferences held globally, including the ones in Doha in 2016 and Australia in 2019. It has won the India Biodiversity Award by UNDP for the conservation of the whale shark, under the co-management category in 2014; the Green Governance Award by BNHS in 2005.