The Thomson Reuters Foundation, the corporate Foundation of the global news and information services company, announces the winners of its sixth annual Stop Slavery Award in a ceremony recognising individuals and organisations making a significant impact in the anti-slavery space.

Tony’s Chocolonely, Justice and Care and Tafteesh are amongst those awarded for their outstanding contribution to the global fight to end modern slavery and human trafficking.

The Stop Slavery Award was launched in 2015 as the first global recognition for businesses that had set a gold standard in efforts to eradicate forced labour from their supply chains. Reflecting the wide range of actors dedicated to ending the scourge of modern slavery, the Award has since expanded – with the introduction of additional categories recognising journalists, innovative solutions and cross-sector collaboration.

Tony’s Chocolonely, Justice and Care and Tafteesh are amongst those awarded for their outstanding contribution to the global fight to end modern slavery and human trafficking. 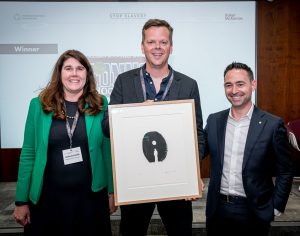 Tony’s Chocolonely has won this year’s Stop Slavery Enterprise Award for Goods and Service Companies for their standout commitment to transparency – with the confectionary company commended for reporting on both its positive and negative impacts, as well as its child labour monitoring and remediation activities. Judges praised Tony’s Chocolonely for its willingness to acknowledge and confront entrenched challenges in the cocoa sector, including deliberately working in Ghana and the Ivory Coast to improve supply chains and spotlight the root causes of modern slavery and child labour.

Henk Jan Beltman, Chief Chocolate Officer at Tony’s Chocolonely, said: “The vision of Tony’s Chocolonely is 100 per cent slave-free chocolate. Not just our chocolate, but all chocolate worldwide. This is our raison d’être. We believe that all companies carry a responsibility to make the world nicer. We are over the moon to receive the prestigious Stop Slavery Award. It is an important nod to our roadmap toward change and a confirmation that we are on the right track to achieving our mission. Let’s make an impact together.” 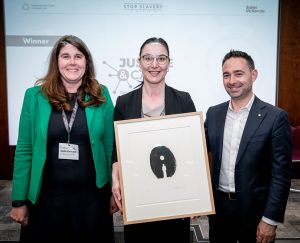 Justice and Care is named the winner of the Stop Slavery Innovation Award in recognition of its ‘Victim Navigator Programme’. The programme sees specialists embedded within the heart of police forces in the UK to help identify victims of modern slavery, provide support to those rescued and help bring perpetrators to justice. To date, specialists have supported 466 modern slavery investigations, and over 3,600 frontline professionals have been trained in victim identification.

Christian Guy, CEO at Justice and Care, said: “We are thankful that the Victim Navigator Programme has been recognised with a Stop Slavery Award – it means so much. Partnering creatively with police around the country, the model shows that if we put survivors first and help them to recover, we transform our chances of breaking slavery’s vile criminal business model too”. 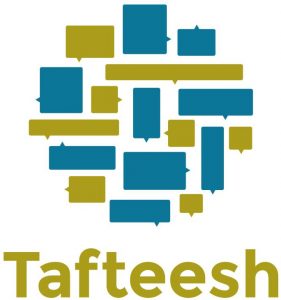 Meanwhile, Tafteesh – a coalition of survivors, lawyers, journalists, NGOs and researchers – is named the winner of the Stop Slavery Collaboration Award. Judges noted its holistic approach to strengthening legal and social systems in India, helping to give voice and deliver justice to victims of human trafficking. “I am honoured to receive this prestigious award from TRF on behalf of all members of Tafteesh. This award comes at a time when the world has witnessed alienation and isolation like never before, and has seen the power of collaboration, cooperation and collective journeys like never before. Human trafficking itself relies on connect between exploiters who transcend boundaries and barriers of law and controls. The response must therefore also leverage on interagency and interdisciplinary cooperation and coordinated planning and action, and Tafteesh is one such tried and tested model led by survivors of trafficking and supported by lawyers, social workers, researchers, mental health professionals and management professionals. We are all grateful to you for validating this experience and journey,” said Roop Sen, a senior member of Tafteesh collaboration. 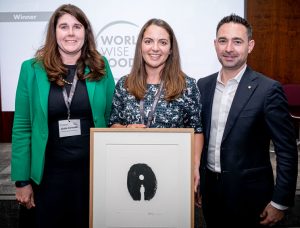 Other winners include UK-based World Wise Foods, which won the Enterprise Award for Small & Medium-Sized Companies for its best-in-class efforts to ensure high standards and mitigate human rights risks throughout its supply chains. NGO Novi put has been handed the Stop Slavery Hero Award for its grassroots impact in Bosnia and Herzegovina, and Brazilian journalist Thais Lazzeri received the Stop Slavery Media Award for her investigation into how the pandemic exacerbated the exploitation of Bolivian workers in São Paulo’s textile sector.

All winners received a custom-created artwork designed for the initiative by Turner-prize winner Anish Kapoor. 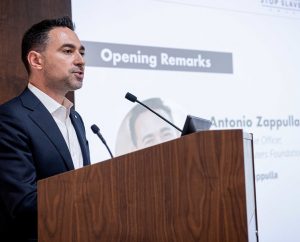 Thomson Reuters Foundation CEO Antonio Zappulla said: “Modern slavery remains one of the greatest human rights challenges of our time, with converging crises – including the COVID-19 pandemic, the climate emergency and international conflicts – only leaving more people at risk of exploitation. It is an honour to reward the outstanding work of businesses, NGOs, journalists, and lawyers – hailing from different parts of the world but united in their missions to combat this global scourge once and for all. We hope that this recognition will inspire others to act, and ultimately help to foster more inclusive societies where fundamental rights are protected”.

Global law firm Baker McKenzie was Headline Sponsor for this year’s ceremony, which was held at their London office, with welcoming remarks from Francesca Richmond – a partner in the Firm’s Dispute Resolution practice. Baker McKenzie has supported the Award since its launch and helped to develop the extensive questionnaire for the Stop Slavery Enterprise Award applicants, which highlights human rights best practices in corporate commitment and reporting, performance management, business partner engagement, risk assessment and investigation and remediation.

Baker McKenzie partner Kevin Coon, who has played a key role in the Firm’s support of the Award, said: “Working side by side with the Thomson Reuters Foundation in the inception of the Stop Slavery Award in 2015, and its development since then, is an example of what can be achieved when dedicated organisations collaborate. Modern slavery takes various forms, and although it is often invisible to the naked eye, it can be found all around us. As a Firm, our pro bono work on human and labour rights informs the deep insight and work our professional teams bring to client human rights risk, compliance, and solutions. The Stop Slavery Award provides a forum for companies to share best practices and collaborate to address a major issue of our time — and we are committed to advancing its ambitions”.

The United Nations’ International Labour Organization (ILO) and Walk Free Foundation estimated that there are at least 40.3 million people around the world who are victims of modern slavery. According to the ILO, forced labour generates $150 billion in illegal profits every year.