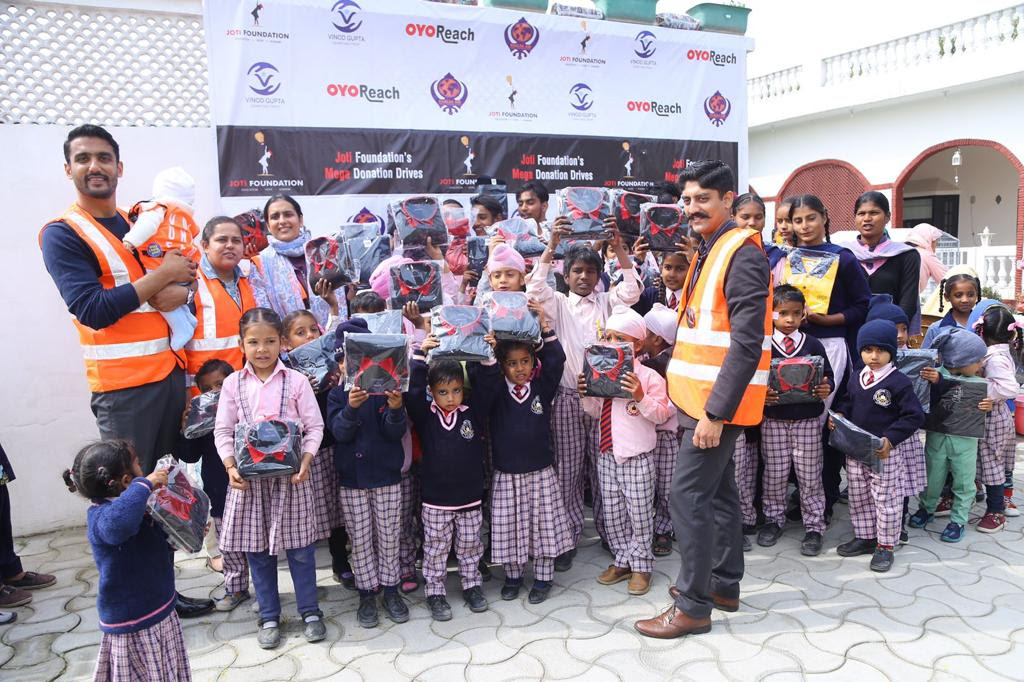 Mumbai: Keeping the memory of Late Prabjot Singh Brar, a self-made philanthropist with a great heart and magnanimous spirit who guided and supported many families, and the person behind Joti Foundation, alive, his wife Sarabjit Kaur and children, Ajit Brar and Prabkiran Naman Brar continues to serve the underserved around them. A successful lawyer by profession, Ajit Brar at a young age has helped many disadvantaged families and handicapped children by providing guidance, support, financial aid and the means to live a dignified life.

This drive is also organised to honour Late Namanveer Singh Brar, a shooter and international medallist, Joti Foundation initiated one of the biggest donation drives “Redistributing Happiness and Spreading Smiles” in various villages and government schools across Punjab. The two-time World University medal winner in shotgun for Punjab University, Late. N.S Brar believed in making everyone feel empowered, confident, inclusive and that anyone can be uplifted with a smile.

Miss India Earth 2014, who is also the first Indian to hold seven international titles and is now an actor, Alankrita Anup Sahai, believes that “No exercise is better for the heart than reaching down and lifting people and doing something for people who can never repay you.” Having lost her father Anup Sahai recently, she resonates with the goals of the NGO and had joined hands with them to help people the way her father did.

Although around eight per cent of the State’s population is below the poverty line, there is a significant number of people who still long for the necessities like Roti, Kapda aur Makan. We are here to provide a solution to preserve their dignity and have at least a few pairs of fresh clothes through this drive.

For this noble cause, Joti Foundation partnered with OYO Reach, Khalsa Aid & Vinod Gupta Charitable Trust In its first phase, the volunteers are excited to spread smiles to over 15,000 families of Punjab through “Redistributing Happiness and Spreading Smiles”. For the first time, an organisation is spending its time and resources to redistribute something as simple as clothes that were donated by OYO Reach but the smiles and blessings that we are collecting in return are priceless.

The drive had begun on February 22, 2022, at Namanveer Singh Brar’s native village Ishar Singh Wala, Barnala, where along with the distribution of clothes to over 2000 people, a free dental camp by Dr Prabsukhman Brar was also conducted.

On the 24th, the “Distributing Happiness and Spreading Smiles” drive was conducted at Village Chak Sherewala where along with the distribution of clothes, medical facilities were made available on-site for their dental and overall health checkups where free tests were conducted and free medicines were prescribed to them.

During this drive, people were sensitised about their rights and duties. The Foundation informed the people about their service and readiness in helping them with any problem. The NGO wants to boost the morale of the people and instil trust so that they know they are important and cared for.

The NGO’s future plans include but are not limited to the sustainable development of villages, education of girls, medical aid for people, funding small farmers and small-scale businesses, generating employment for the disabled.