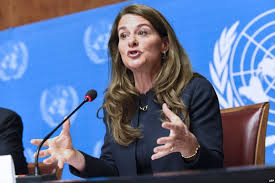 New Delhi: Business leader and philanthropist Melinda Gates is passionate about issues related to women, global health and education. As co-chair of the Bill & Melinda Gates Foundation, her life is a whirl of activity and travel as she zips across geographies chairing panel discussions, participating in strategy meetings and working on behalf of the foundation. When in India, she makes it a point to go to the villages to interact with rural women and children. But it is plenty of exercise—a good jog and kayaking—that helps her unwind. Before heading home, she also spends a day in complete silence somewhere up in the foothills of the Himalayas, hiking and meditating. This helps her recharge and absorb what she has seen and take that back to her work in the US.

How do you decide on the issues that you want to focus on?

Bill and I have this fundamental belief that all lives have equal value, no matter where we live on this planet.  So, we start by taking an economic approach and evaluating where in the world most deaths happen, diseases we should focus on and   measures for preventing childhood deaths, in particular, maternal deaths. We then invest in those places where we can make the most difference in the lives of people.

All philanthropy can do is what Bill and I call is a catalytic wedge. It can take risks, it can look at things like innovation; maybe it is in a vaccine, in a seed or in biotechnology. Look at new innovations and then figure out in consultation with the government how to scale those up. That is the only way. Even our foundation, which is considered very large, there is no way we can tackle all these issues around the world. So, it is (the) government that has to scale those things up.

The Gates Foundation has been doing a lot of work in India. Is the work you do here replicable across other parts of the world?

Yes, it’s absolutely replicable. The work we are doing in UP and Bihar, for instance, to try and help get the health system working more efficiently, primarily the primary healthcare facility where a woman comes in to deliver a baby or to learn about her ante-natal needs or to get a vaccine—getting that system working is incredibly important for the entire world. And so we take lessons from other parts of the world and bring them to India and other places. The work we did, for instance, in polio in consultation with the government, the UNICEF and WHO (World Health Organization), India became a model for the world in terms of polio. We can then go to other countries and talk about the eradication here.

In your 2016 annual letter, you talk of time as a superpower that will empower women. Do you think if women in India had more time, it would enhance their quality of life?  If so, how?

Melinda is co-chair of the Bill & Melinda Gates Foundation. Along with Bill, her husband and co-founder of Microsoft, she shapes and approves the foundation’s strategies and sets its overall direction. Melinda is passionate about issues related to women and children, health and education. She received a bachelor’s degree in computer science and economics from Duke University in 1986 and a master’s in business administration from the Fuqua School of Business in 1987. After joining Microsoft that year, she worked in the development of multimedia products and was later appointed general manager of information products. In 1996, she left the firm to focus on her philanthropic work and family.

There are some things that women want to do like care for the children and care for the elderly, but a lot of it is cooking and cleaning and collecting firewood and tending the house.

We know we haven’t gotten this  anywhere in the world yet—but other places where men and women’s unpaid work at home is much closer to equal, when you do that, you unlock the woman’s potential. If she’s not doing so much at home, she can participate in the labour force, get some economic means and put those rupees back in the family, so I think time has a huge potential for change in India.

In the reduce category, it is really about taking innovations and making sure everybody has access to them. So, take clean, affordable energy, for example,  don’t get women cooking over small fire. If she has a stove to cook over, it’s less wood, less lung pollution and less time as well, so that’s just one example. But reducing really has to do with innovation, what labour-saving devices you can have. If you have clean, cheap energy, you can start to have other appliances in your kitchen. You can have a washing machine, a dryer, a dishwasher; those are huge things in terms of reducing women’s (work) time. And then, in the redistribute category, it’s policy work. So, for instance, having a good family leave policy so that not just a woman but even a man can take time off to care for an elderly parent, to care for a young child. We know that if men take that time off, they are more involved in the children for the rest of the child’s life. So, you need to make sure that you have the right policy so that a man or a woman can leave the workforce for a time and then go back to their job or the same level job and then come back with no penalties.

How can private companies close the gender gap, especially in developing countries?

I think the private sector can take the lead in a number of these areas. If they look at policies, especially family leave policies in their own companies. I think that’s a great place to start because so many people go to work in the private sector, and you often see the private sector leading before government; so for me, that would be the number one place they could start.

What have been your leanings from the Gates Foundation on extended paternal leave and how it impacts the family?

We have just announced our extended parental leave policy this past summer, so we will get more data next year, but I can tell you anecdotally what I’m seeing. More people go out for longer period of time (on parental leave) and I’m seeing men take it. In fact, I’m seeing both men and women take it and it’s important for the men to take it because of role models that it’s okay and everybody is coming back to the same level of jobs, forcing us to do as a foundation to train up more dual people. They might not be quite ready for that role versus the person who went out, but it’s forcing us as managers that we have to train people up so they are getting better skills faster and they are better at their jobs because of it. So, I think it’s going to be interesting to collect the data on this in the next few years, but that’s what I’m already seeing anecdotally.

You normally prescribe technology solutions to gender-based economic issues. Does policy have a role in this?

Depends on what issue you are working on, but yes, I believe technology and policy go hand in hand. You have to have the right policies in place to bring about the right innovative solutions. So, India is the perfect example for this.The banking sector has opened up so that you will have payment banks, which will allow phones now to have mobile money—that is huge; you will never get that technology piece, that innovation working for everybody, not just a segment of the population but everybody, unless you opened up that regulation and that’s a key policy lever. And we are trying for other countries around and in the South-East Asia region to do that.

What do you think is India’s future given that we have all these different social, economic gender issues?

There’s definitely work ahead, but my optimism for India is unbounded. You have assets that I don’t see in other countries when I travel. You have a democracy and yes, a democracy is messy, but it’s a great system, you have a free and transparent press that lays issues to light and you have public will, you have civil society pushing on the government. When you have those three things working, you are going to make change because what you are seeing is these issues are coming to light; so yes, there are lots of hidden gender inequities all over the world, but in India, some in particular, but as you see them come out in the press and see the outrage that follows, and see civil society holding the government accountable to make changes, that’s when you know the society is working for you.