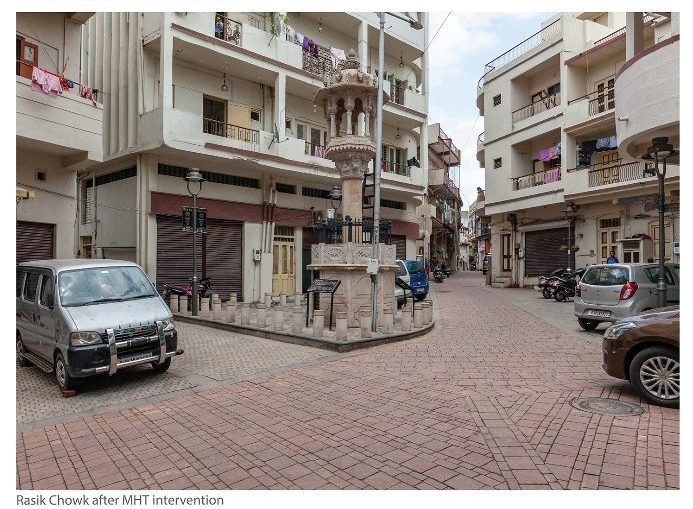 Ahmedabad: Community participation in heritage conservation is the key to keeping the living heritage of India’s first UNESCO world heritage city of Ahmedabad, alive and relevant to the younger generation and to the people at large. Taking this idea forward, Ahmedabad-based Mahila Housing Trust (MHT) demonstrated the way forward to make living heritage – the Pols of Ahmedabad – more liveable by spearheading a heritage revitalisation project. A Pol is a housing cluster where families of specific community groups reside. Pols are typical of urban centres in Gujarat, especially of Old Ahmedabad. In the Walled City of Ahmedabad, Pols have been touted as the living heritage, as the centuries-old homes continue to be occupied by locals. MHT’s heritage revitalisation project was undertaken at the Dhal ni Pol, which exists since the 11th century. 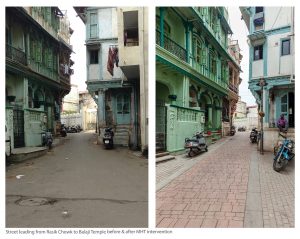 The public realm improvement project of Dhal ni Pol is part of a bigger initiative that MHT took up with an aim to improve the living conditions within this Pol because it constitutes of low-income housing stock. 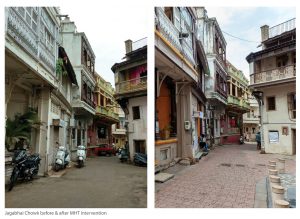 in 2016 for a stretch of 250 metres, for which MHT entered in an MOU with Amdavad Municipal Corporation (AMC). Subsequently, MHT partnered with SELCO Foundation and continued receiving technical guidance from experts the planning and design experts.

As part of the project, MHT spearheaded several 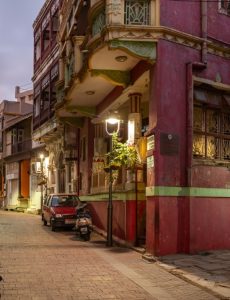 interventions such as conservation and restoration of bird feeders, a public well, heritage structures in the Pol, a privately-owned rainwater harvesting tank and restoration and repainting of building facades, organising the parking spaces by demarcating areas, installing a new street light network and a dry hydrant-based fire-fighting system and a stormwater collection system with a percolation well.

Through a community-centric and collaborative approach, MHT roped in public entities and private players to execute the project. The entire project was executed in partnership with SELCO Foundation and with technical guidance from 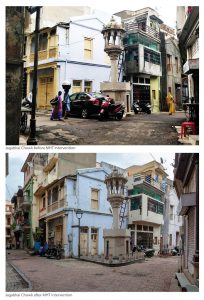 Before implementing the project, MHT had carried out a socio-economic survey which revealed that 84 per cent of the interviewed households had an income of Rs 15,000 a month or less; whereas 78 per cent of families struggled to get basic amenities including water, sanitation and solid waste management.

“Lack of awareness of the heritage value, financial and technical resources were the primary factors contributing to the continued deterioration of the heritage structures and precincts in the Pol.  The public realm improvement project of Dhal ni Pol is part of a bigger initiative that MHT took up was aimed at improving living conditions within the Pol by improving and re-organising public spaces, uplifting community spaces within the Pol and making the neighbourhood more liveable. This will not only instil a sense of belonging but also pride among community members and residents at the Pol of being caretakers of the centuries-old heritage of Ahmedabad,” said Lalita Krishnaswami, Trustee, MHT. 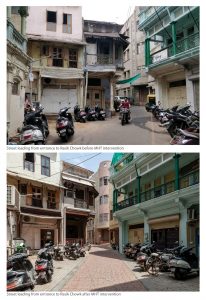 MHT believes in making the community and especially the women of the community, the agents of change. For this project, MHT organised a series of workshops to help map heritage structures and buildings, create awareness among community women leaders, training and engage them in conservation activities. Special workshops were conducted to demystify the AMC’s Heritage Transfer of Development Rights (TDR) Policy. MHT also signed a memorandum of understanding with the AMC for the execution of this public area improvement work.

With a view to instiling a sense of belonging and pride among residents, MHT also trained women and children of the Pol to conduct heritage walk every year through World Heritage Week. During these heritage walks, the residents themselves would take people around their neighbourhood, explain details about the different structures, the culture in the Pol and tell tales of heritage.

“In the longer run, the idea behind this project is also to incentivize residents for their involvement in restoration and conservation of private structures with heritage value and help generate livelihood opportunities for the community women, by leveraging the heritage value of the Pol. Such a project can be taken as an example to further undertake similar initiatives at various Pols of Ahmedabad to help revive heritage structures through public, private and community participation,” Bijal Brahmbhatt, Director, shared.

With the learnings of this project, a set of guidelines can be created to not only help improve the precincts of this city but also many other cities, across India.

Utpal Padia, Officer on Special Duty & Deputy Municipal Commissioner (Retd) AWHCT-AMC, said, “The areas in urban environments have fallen prey to degeneration despite thriving economic and cultural activities. Public realm revitalisation is a subsequent and integrated approach to improve the liveability index in this context. This initiative of MHT for the revitalisation of Dhal ni Pol is unique in many ways apart from the rejuvenation of the public realm, collaboration with Municipal Corporation for upgradation of civic amenities and restoration by expert agencies. Moreover, aesthetic improvement of precincts, facades, re-painting etc. has also renewed visual interest.