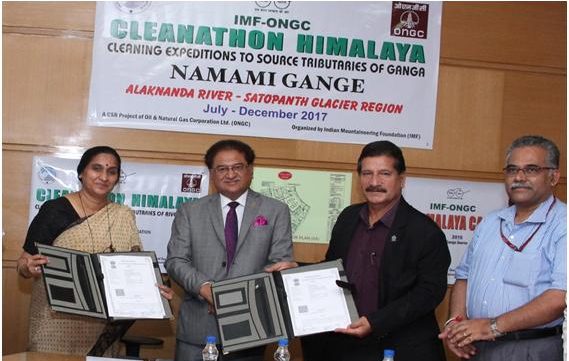 Launching the current edition of the programme, Shri D D Misra, Director said, “Today, we have launched the fourth phase, under which we aim to clean the source and catchment areas of three important tributaries of Ganga in Uttarakhand i.e. Bhagirathi, Alaknanda and Pindari.”

Mr. SSC Parthiban, ED-Chief also reiterated what Shri Misra mentioned that the efforts made by the CSR group of ONGC has led to a collaborative effort between the company and IMF as part of the Swacchta Pakhwada drive of the Ministry of Petroleum and Natural Gas (MoPNG) beginning from 16th to 31st July, 2017, and ONGC remains committed to play an active role in the Swachh Bharat Mission of the Government of India.

ONGC is planning to make this effort a perpetual “Total Clean Himalayas” campaign, with a view to ensure cleanliness and revitalisation of the most unique symbol of our eco-system, the Himalayas, by removing hazardous garbage/waste generated by tourists at different tourist spots of the Himalayas. In the three phases completed so far, ONGC has covered important peaks and glaciers of the Himalayas in Uttarakhand, Himachal Pradesh, Jammu and Kashmir and Arunachal Pradesh.

The total cost of this project will be Rs 35.4 Lakhs, with each expedition consisting of 8 to 10 member teams. The duration of each cleaning expedition will be 23 days, starting from July 2017 and ending in December 2017.

With innovation being the key CSR driver, this ONGC project titled ‘Cleanathon Himalaya’ will leverage the competencies of both ONGC and IMF in initiating a cleanliness drive across the upper reaches of the mighty Himalayas.