Water is one of life’s most precious commodities. It presents India’s largest problem and greatest opportunity. A village with abundance of water will typically have substantially higher educational levels, superior health and life expectancy, and incomes that are a multiple of those suffering from water scarcity.

India is classified as a water-adequate nation. Yet, increasingly, more and more people do not have water to drink; more and more farmers face drought and starvation, and more and more industries shut down or cannot grow because of shortage of water.

The crisis is largely man-made and has four key causes:

Is there a Solution?

The heart of the solution is to locally harvest rain water by reducing run-off and losses due to evaporation by recharging the ground water table. In other words, the solution is watershed management. It is inexpensive and has been used with great success but only by a few hundred villages in different parts of India. The challenge is to take the solution to scale and ensure that every single village, town and city harvests rain water.

In the summer that went by, the core team of the Satyamev Jayate TV show, which has been working on the issue of water scarcity in Maharashtra through Paani Foundation, a not-for-profit company co-founded by Aamir Khan and Kiran Rao, undertook its most ambitious project yet – to make Maharashtra drought-free. 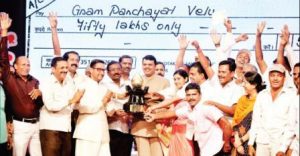 The idea was thus. Paani Foundation would train several hundred villagers from three talukas on watershed development, and they would go on to participate in the Satyamev Jayate Water Cup in April. The 45-day long competition would involve ‘shramdan’, or voluntary labour in building important structures and thus, water storage capacities, and the winners would get cash prizes.

‘In the 45 days marked for the competition, 4,203 villagers from 34 villages completed watershed work worth over One Crore Rupees by working for two hours on an average. Here’s how: With the rate per day for physical labour being Rs. 191, this total amount came close to more than Rs. 91 lakhs, even with 1/4th of the work day taken under consideration. This was simply unparalleled’

The idea was path breaking, the heroes were common villagers and the ‘villian’ was a dark, powerful one – drought, which had claimed hundreds of lives and ruined livelihoods in the past decade.

Initially,the villagers asked,”’Shramdan? We have nothing of that sort happening here.” The same people eventually came together, armed with shovels and pickaxes to participate in the movement and a revolutionary model of development was born. Let me share a bit about the work done in the Ambajogai taluka of Beed district. In the 45 days marked for the competition, 4,203 villagers from 34 villages completed watershed work worth over One Crore Rupees by working for two hours on an average. Here’s how: With the rate per day for physical labour being Rs.191, this total amount came close to more than Rs.91 lakhs, even with 1/4th of the work day taken under consideration. This was simply unparalleled.

The people’s movement got tremendous support from government and non-government bodies alike, such as the Samast Mahajan Group, Jnana Prabodhini and the Jalayukt Shivar Abhiyan. Girish Shah of Samast Mahajan Group says, “This is a ritual that demands everybody’s sacrifice; the contribution of time and sweat. And no matter what, in the end we shall be triumph.”

Helping hands found their way to the villages from various directions. During the course of the competition, physical structures worth Rs.13 Crores were completed through donations in just Ambajogai taluka and have helped in    creating a water storage capacity of crores of litres.

The villages of Radi Tanda, Khapartone, Patoda, Kumbephal, Kolkanadi and Shepwadi have seen a metamorphosis that will now last for decades. With structures for water conservation being built from scratch, awareness about watershed development spread. But more importantly, it made people across ages and social strata believe in themselves and in their power to solve their own problems.

The result? The participating talukas got their reward in front of their eyes even before the competition named a winner on 15th August at a grand awards ceremony. Thousands of watershed structures blossomed across the village landscape, creating an annual water storage capacity of 1,368 crore litres, an equivalent of 13,68,000 tankers of water, with a market value of Rs.272 crores.

Furthermore, the Satyamev Jayate Water Cup put the spotlight on the locals, as the media arrived to discover their stories, stories of some incredible water heroes. What started with a competition turned into an ongoing celebration for a better future. The long term rewards were not just ample water storage but a new sense of pride and confidence among villagers.

The first showers of monsoon finally arrived, all the villagers rushed to the rivers and streams, eager to see the fruits of their labour. The water too, as if to keep an unsaid promise, stayed where it fell and did not flow over beyond the village borders. Entire villages and talukas now have sufficient water and sights of villagers walking for miles carrying vessels and waiting for tankers have, hopefully vanished for good. One of the elders could not control his emotions. He said, in a gleeful voice, “It rained a lot more than this last year. But our rivers could not hold the water down. It has been years since we saw the water stay like this.” His words and the eyes, beaming with satisfaction, were simply priceless. 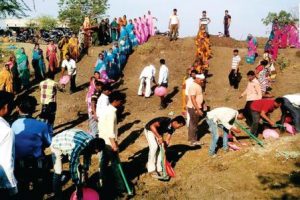 Prasad Dada spoke about the times when he had worked on the deepening of a river in Kolkanadi. No one would bother to find out who he was, what he was up to. But now everyone is aware. The Water Cup has created much awareness about conservation and the value of water. People now measure the rain in millimetres and discuss the amount of water conserved – the same people who would walk miles for water, or who would wait for water tankers and curse others for their plight.

‘The villages of Radi Tanda, Khapartone, Patoda, Kumbephal, Kolkanadi and Shepwadi have seen a metamorphosis that will now last for decades. With structures for water conservation being built from scratch, awareness about watershed development spread. But more importantly, it made people across ages and social strata believe in themselves and in their power to solve their own problems’

Over the next few months, plans are on to bring awareness among the public regarding the talukas and ways in which they can support them. This will be taken up our website and social media platforms.

Our friend Bapu Patil from Dhanora says, “Water was our big reward but it was also a lesson. We realised that no matter how dire the adversity, all it takes is the first step. Once we take that, the whole village joins you in the effort.”

This is proof that the Satyavame Jayate Water Cup competition transcended to a different level. It went from being a watershed development competition to an initiative that builds, augments and strengthens the minds, of individuals as well as collectives.

The summer and monsoon of 2016 would be remembered for a long time by thousands of villagers in Maharashtra, but it would also mark a new beginning for the Satyamev Jayate Water Cup competition, which will be held again early next year, and this time, in 30 talukas!

Paani Foundation’s work so far is only a testament to the fact that just one simple, powerful idea, if backed by dedication and teamwork, can blossom into a revolution and change lives forever.