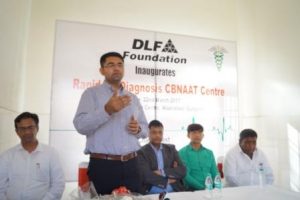 Gurgaon, 24 March, 2017: The State Government’s efforts to move towards a ‘TB-free India’ got a shot in the arm with the installation of Cartridge Based Nucleic Acid Amplification Test (CB-NAAT) machine, ahead of World TB Day at Wazirabad Primary Health Centre today. The initiative is a result of the efforts of DLF Foundation in collaboration with the Ministry of Health and Family Welfare. The screening through CB-NAAT machine will be done free of cost at the health facility.

The move is expected to reduce workload on the lone CB-NAAT machine installed at Civil Hospital, Gurgaon, and also help in early diagnosis of the disease. The CB-NAAT is a revolutionary rapid molecular test which detects Mycobacterium tuberculosis and rifampicin drug resistance, simultaneously. This test is fully automated, and provides results within two hours. A single test from the CB-NAAT machine costs around Rs. 5000 per test. However, this centre will provide free-of-cost services to patients. The cost of the CB-NAAT machine is estimated at Rs 16 lakhs.

Inaugurating the event, Shri. Vinay Pratap Singh, Additional Deputy Commissioner, Gurgaon, said, “TB has assumed a monstrous form in India, claiming the lives of several people every year. There are about two lakh suspected cases in Haryana, out of 2500-3000 cases are reported from Gurgaon alone every year. Installing CB-NAAT machine will go a long way in addressing the need of proper diagnosis and prevention from the disease.” 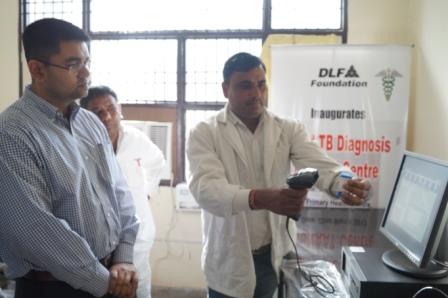 Stressing on the need to eliminate TB, Mr. Ritesh Sinha, Director CSR, DLF Foundation said, “Installing CB-NAAT is our small step towards the Government’s target of eliminating tuberculosis (TB) by 2025. TB affects people in their most productive years causing severe economic loss and endurable suffering. About 50 percent of pulmonary TB cases go undetected every year. Lack of awareness among people and inadequate medical facilities aggravate the situation. There is an urgent need to position TB as a key national health and development issue. This CB-NAAT machine will benefit the residents of Gurgaon to tackle the disease in a better way.”

Speaking on the occasion, Dr. Vijay Kumar, District TB Officer, Gurgaon, said: “The installation of CB-NAAT machine will especially improve the diagnosis of MDR-TB. This is the fastest mode of diagnosing the disease and I hope that the test which is conducted free of cost at the centre will motivate more people to come forward for screening.”

The State Government had earlier launched ‘TB-free Haryana’ campaign in collaboration with Union Ministry of Health and Family Welfare, United States Agency for International Development (USAID) and the Union to target tuberculosis.

India has reported the highest mortality rate for tuberculosis with two people dying every three minutes due to the disease.