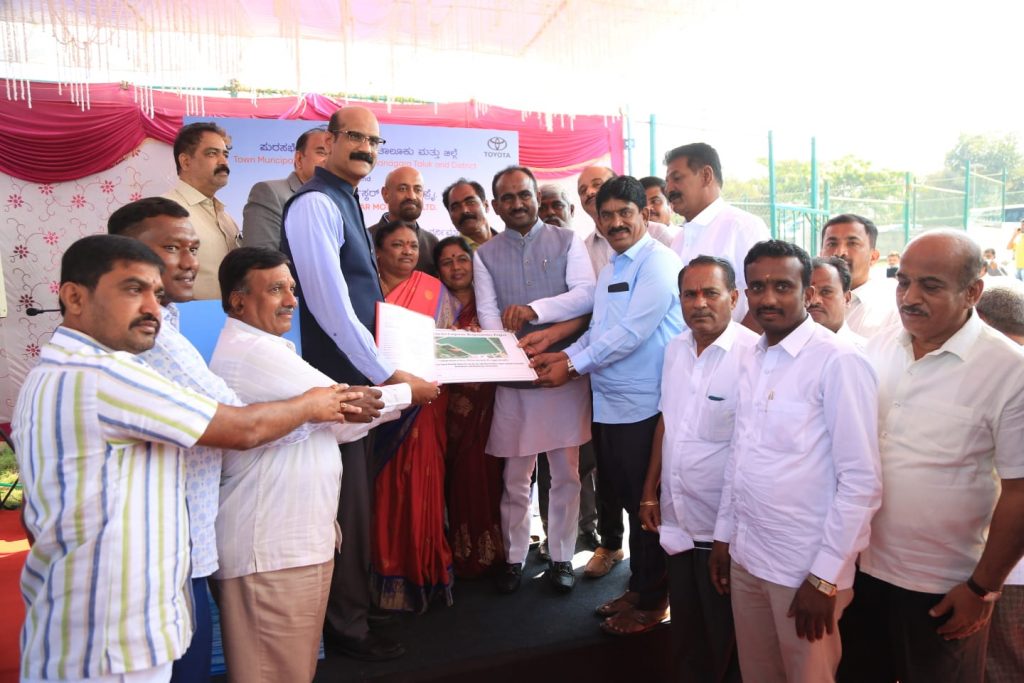 Bangalore: Toyota Kirloskar Motor (TKM) announced its accelerated efforts towards the holistic development of the Ramanagara region by taking the lead in establishing critical community-led interventions. The company has announced two more critical initiatives in the region by setting up the first oxygen generating plant at the CHC, Bidadi, near Bengaluru and spearheading the Lingegowdana Lake rejuvenation.

As a company, we work together with surrounding communities to solve local issues, the company has consistently focused on scalable and developmental projects in the region. The activities revolve around five main thematic areas of Education, Environment, Health & Hygiene, Road Safety and Skill Development, which are aligned on the need of the communities and national priorities.

Under our CSR initiatives, healthcare has always been a priority area and we have continuously worked hard with the support of the Government to ramp up healthcare facilities as and when required in the district. The new oxygen plant will have a capacity to generate approximately 70 cylinders per day ensuring oxygen supply to CHC, Bidadi, and further supplementing oxygen supply to government hospitals in Ramanagara district. Jointly developed by Toyota Kirloskar Motor and Toyota Kirloskar Auto Parts with an investment of INR 14 million, this new unit makes Bidadi CHC the first health centre equipped with an oxygen plant. 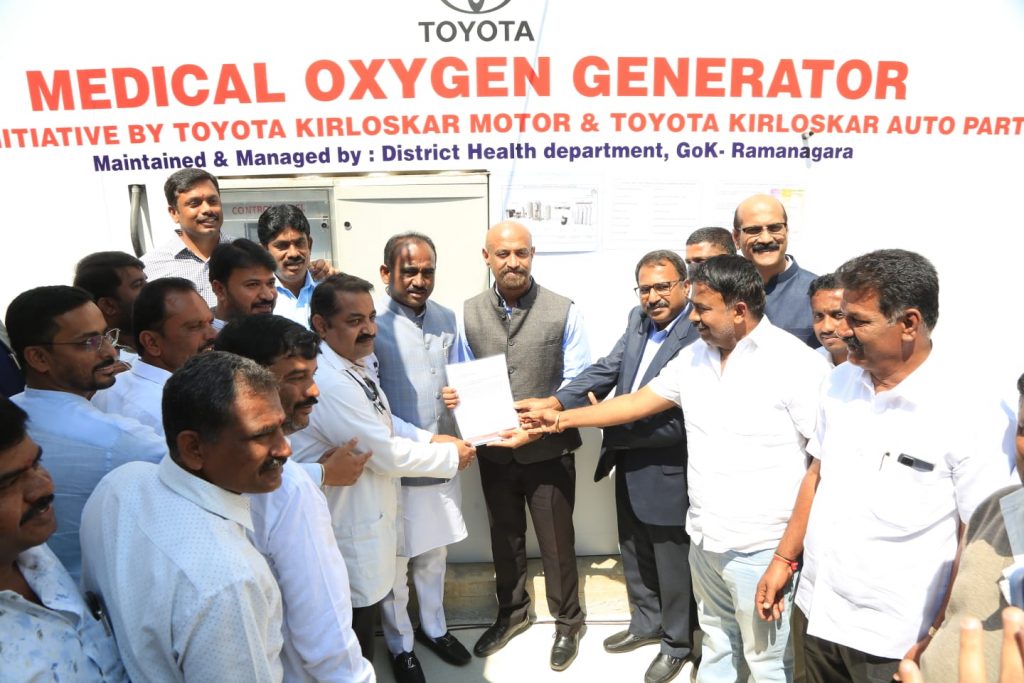 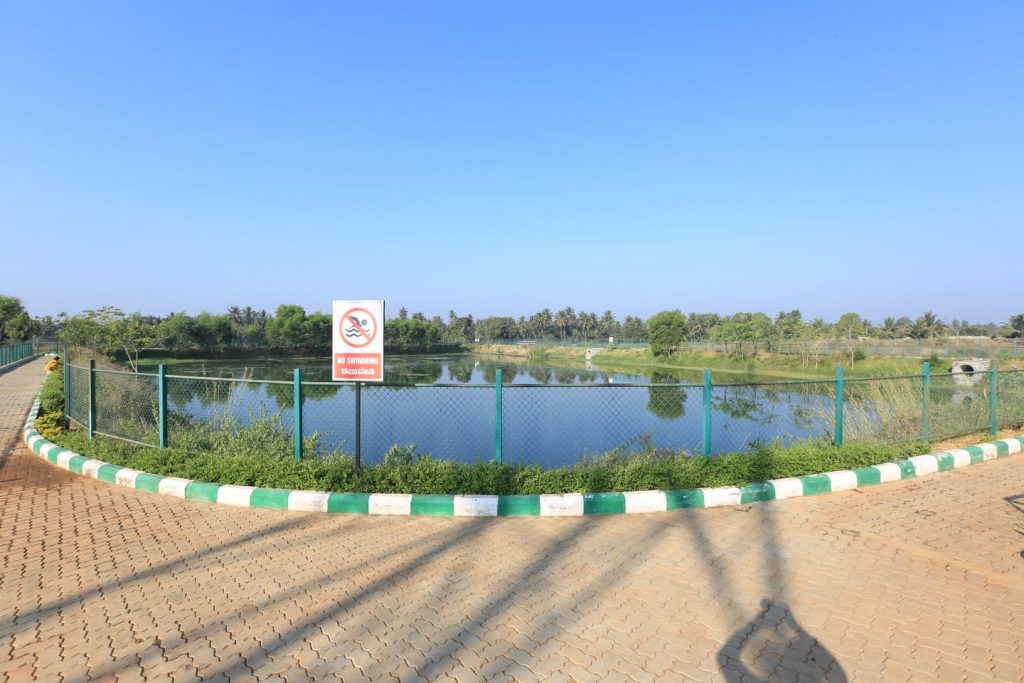 Furthermore, as part of its responsibility towards protecting the environment, the company also extended support in rejuvenating the Lingegowdana Lake which was polluted with silt, weed and waste and eventually became a dumping yard rendering it incapable of use. The company’s consistent efforts have not only ensured sustainable restoration of the Lake but have also enhanced its ability to hold up to 21000m3 litres of fresh water, substantially adding to the overall wellness of the community.

Talking about these developments, A Manjunath, Hon’ble MLA of Magadi constituency, Government of Karnataka said, “In these unprecedented times, the support given to the government by corporates have been instrumental in accelerating government efforts for healthier and safer communities. TKM has been one such corporate that has been an active contributor to the overall development of areas around its plant. The establishment of oxygen generating plant and the lake rejuvenation is both timely ventures and that provided much-required infrastructure and will significantly benefit the surrounding communities.”

Speaking at the occasion, Raju B. Ketkale, Executive Vice President, TKM, said, “We are immensely delighted to have played a small but vital role in strengthening the healthcare infrastructure of the Ramanagara region. At Toyota, our philosophy of bringing ‘Mass Happiness to All’” is not limited to our consumers but for everyone in the wider community as well. The global healthcare crisis spelt the need to build a sound healthcare infrastructure that is within the reach of people. We believe that it is the right of all citizens to have access to quality health care and the oxygen plant that we built is part of our commitment towards building a healthy community.”

Commenting on this occasion, Sudeep Dalvi, Senior Vice President & Chief Communication Officer, TKM, said, “Toyota is committed to environmental conservation and over the years and has taken a keen interest in strengthening these efforts in the local community. The Lingegowdana lake rejuvenation project reinforces this commitment as we wanted to instil the importance of protecting the natural resource, enhancing biodiversity and a source of clean water to increase the groundwater table for a healthy community. Toyota’s sustainability initiatives have been the guiding principles for making us a responsible corporate citizen committed to community welfare.”

Since the onset of the pandemic, TKM has been at the forefront in driving relief efforts in the district. In line with its safety philosophy, the company has undertaken numerous measures to complement Government efforts to ramp up healthcare facilities like CT scanner and upcoming community health centres, etc. In pursuance of these efforts, the new oxygen plant will cater not only for the local requirements but also to the entire district. The onsite oxygen generating plant will have a capacity of 260LPM, with features including a compressed air system, refrigerant air dryer, filtration system, molecular sieve units and a fully automated oxygen concentrator module. The purity of oxygen is 93 per cent and the plant will include various latest technologies like the bottling facility which will further enhance the oxygen supply.

The second intervention in the form of lake restoration efforts of Lingegowdana Lake not only aims at driving social transformation but will also play a critical role in environmental conservation thus creating a massive impact on the local communities. Based on inputs from the local community and recommendations provided by environment experts, extensive rejuvenation activities such as desilting, segregation of effluents and beautification of the lake involving the development of walk paths, children’s playground, idol immersion tank, shelters etc., were implemented. With a restored groundwater table, the lake is now of immense benefit to its community, providing scenic beauty, water, and clean air for the people in the area.