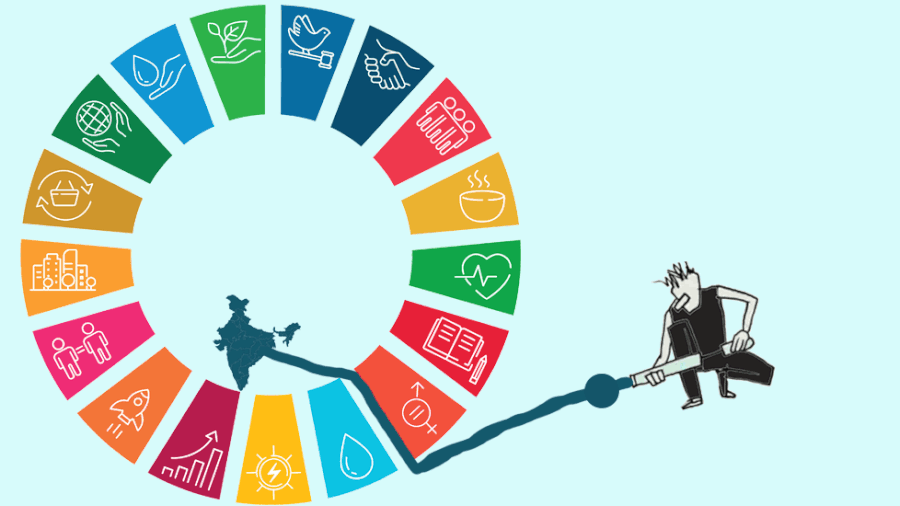 The first case of the 2019–20 coronavirus pandemic in India was reported on January 30, 2020, originating from China. As of May 15, 2020, the Ministry of Health and Family Welfare has confirmed a total of 53,035 cases, 30,152 recoveries (including one migration) and 2752 deaths in the country with mortalities around 3.4 per cent and recovery rates over 31 per cent. Experts suggest the number of infections could be much higher as India’s testing rates are among the lowest in the world. The infection rate of COVID-19 in India is reported to be 1.7, significantly lower than in the worst affected countries.

Keeping in view the surge and precautionary measures including social distancing, India is under a total lockdown since March 22 until May 31. This has been a historic decision taken by the Indian government to impose a nationwide lockdown of 1.3 billion people (almost 20 per cent of humanity worldwide). The government’s actions so far have resulted in lower reported cases, recovery of about 29 per cent with a mortality rate of 3.2 per cent.

Recognising this strenuous effort of the Indian government’s lockdown, the Oxford COVID-19 Government Response Tracker (OxCGRT), in its report based on data from 73 countries, reports that the Indian Government has responded more stringently than other countries in tackling the pandemic. Acknowledging this massive exercise of lock-down, Michael Ryan, Chief Executive Director of the World Health Organisation’s Health Emergencies Programme, said that India had “tremendous capacity” to deal with the coronavirus outbreak and, as the second-most populous country, will have an enormous impact on the world’s ability to deal with it.

National Lockdown and its Fallout 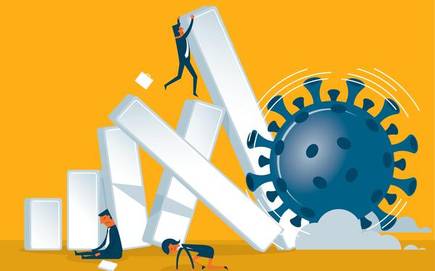 Given a complete lockdown in India, there has been, like other countries, a complete halt in production and consumption of goods, services including manufacturing, and there are visible signs of economic suffering necessitating economic stimulus and bailouts by industry – big, medium and small – coupled with demands of the industry. The worst-hit industries have been aviation, the services sector in general, automobile and construction. The coronavirus has displaced about 10 million labourers from their work; adding to a downturn in the economy. To support these migrant workers, the Indian Government in the last month set aside one per cent of its gross domestic product (GDP) to support approximately 10 million informal workers by way of providing food security and handing them USD 25 as basic income through direct cash transfers to ensure their well being and survival. Subsequently, the Government also announced USD 50 billion to address the issue of liquidity in the banking sector.

COVID-19 has also dealt a fresh blow to the country’s healthcare system and exposed vulnerabilities in terms of the lack of testing facilities, personal protective gears, nurses and doctors and ventilators along with a shortage of beds and hospitals for the infected patients with the virus. 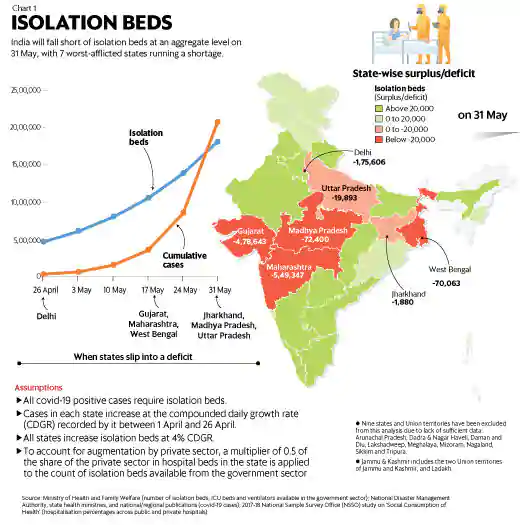 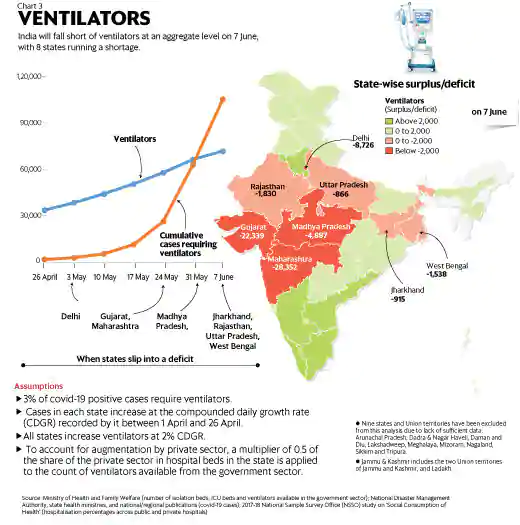 COVID-19 has also dealt a fresh blow to the country’s healthcare system and exposed vulnerabilities in terms of the lack of testing facilities, personal protective gears, nurses and doctors and ventilators along with a shortage of beds and hospitals for the infected patients with the virus. India currently accounts for one bed per 1000 patients and five patients per doctor against WHO’s prescribed minimum standards of three beds per 1000 patients. If this is the case and assuming that there could be a rebound, it is estimated that by Q1 of 2021, the Government would need to infuse about USD 2 billion into improving the health systems and about USD 12 billion over the next decade to create about 2.5 million hospital beds.

The Indian Prime Minister, recently, in a televised address also announced a large economic recovery (reforms) package pegged at USD 270 billion aimed at strengthening country’s supply chains through the private sector and public sector participation in making India self-reliant (without depending on any outside support for essential supplies during anything like COVID-19 next time). This recovery package is the largest announced by far in independent India’s history; accounting for 10 per cent national gross domestic product and 70 per cent of India’s total budget presented for the Financial Year 2020-2021 in February this year. The country thus becomes among the Top 5 that has set aside 10 per cent or more of their gross national product (GDP) apportioned toward the economic recovery package to fight out economic distress and health crisis emanating from the ongoing COVID-19 pandemic.

While announcing the economic recovery plan, the Indian Prime Minister also spoke about climate change and global warming as key future challenges and asked for responsible conduct by the companies in re-setting their economic activities in the post-lock-down period starting May 31. He also stressed on technology-driven economic growth putting people at the centre of overall sustainable development for India. Details of the package are being worked out and are going to have key climate and global warming measures embedded into the economic recovery measures for follow up and reporting. 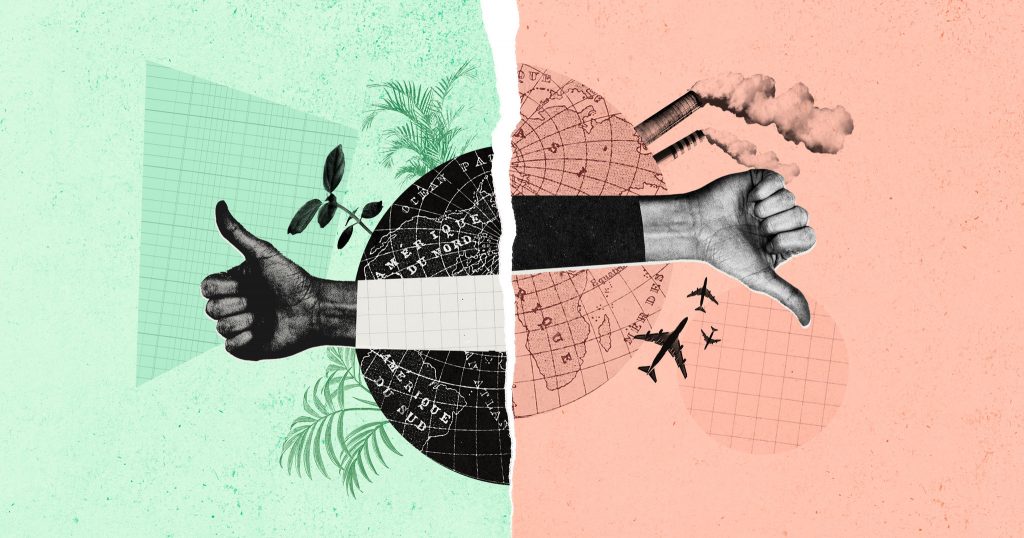 The Government has been discussing directly with the industry the possibility of adopting practices post
COVID-19 that will allow for the continuation of these improved climatic conditions.

The national lockdown in India, like other places, has proven to result in improved climatic conditions including low emissions, cleaner rivers, lower CO2, cleaner air, and improvements in bio-diversity. The Government has been discussing directly with the industry the possibility of adopting practices post COVID-19 that will allow for the continuation of these improved climatic conditions.

For instance, the Government is discussing with the auto industry making greater use of Bharat VII fuel (the cleanest transport fuel) for their new cars, undertaking and revising the adaptation of the proposed e-mobility policy one year ahead of the planned date, and strengthening the EV charging infrastructure and storage facilities. The Government also said they would provide subsidies to those who shift to electric cars or clean-fuel cars. With airlines, the government is discussing their plans to lease out new-generation aircraft that are superior in design and more fuel-efficient. Similarly, with the construction and real estate sectors, discussions to underway to promote the use of graded steel, natural materials made of wood, more efficient cement materials and cutting the usage of water in building new facilities.

During these trying times, India like other countries has seen a visible drop in its NOx and CO2. It has posted a drop of 62 per cent in its NOx and 42 per cent in CO2 (best case scenario) levels. While these changes are visible on a short term basis, questions remain whether such a situation can hold its ground post the virus period when industrial activities resume full-blown.

“This drop of emissions of six per cent, that’s unfortunately (only) short-term good news,” said Professor Petteri Taalas, World Meteorological Organization (WMO) Secretary-General, in reference to a 5.5 to 5.7 per cent fall in levels of carbon dioxide due to the pandemic, flagging that once the industrial activities resume, the emissions can go back to its normal levels. “The extent of urgency in countries’ ability to achieve 1.5 degree Celsius target requires regular and verifiable emissions cut of 7.5 per cent from 2020 to 2030”, states UNEP led The Emissions Gap Report, 2019.

The COVID-19 pandemic has been devastating for the people and economies while simultaneously being a boon in disguise for our climate and environment. The Indian Government has already committed to embedding climate-resilient and technology measures based on human-centric sustainable development. Alongside the measures announced, the Government is further urged to push with greater vigour policy measures such as the promotion of clean fuel; cleaner heating/ cooling options, green-grids, and phase-out of coal. E-mobility measures and creating more green jobs may help stabilise the climate gains made during the current pandemic.

India has charted out a plan, unlike others, that promotes a national economic recovery plan rather than offering handouts to industries with accountability embedded into the proposed plans to account for each rupee spent and the value obtained therefrom. The economic package announced by the Indian Government is aimed at revival, recovery and putting the domestic economy on a fast-paced growth trajectory without being inward.

A plan that has potentially all ingredients for it to succeed and pay a rich dividend to both Indian industries, economies and people in short to medium-term horizon.

Pooran Chandra Pandey is currently a Resident Representative at Climate Scorecard, a US-based international climate think tank besides being a Policy Contributor to the Middle East Institute, Washington DC, and a Non-Resident Fellow at Nkofu Policy Institute, Cameroon.

A founding CEO of a Berlin-based global think tank – Dialogue of Civilizations Research Institute, he has worked with the UN and the Times of India, in senior leadership roles. He holds an M. Phil degree in International Relations from Jawaharlal Nehru University, New Delhi.

Pooran is also a British Chevening Scholar at the London School of Economics and Political Science, London, United Kingdom.