“The Okhamandal region of Gujarat is home to many tribal cultures. These tribal communities have never known an easy life. But what they do know well is their magical art of mirror work and patchwork, a heritage handed down through generations” 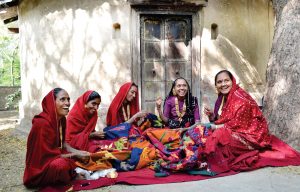 India has traditionally been home to different cultures and people. Unity in diversity is one of the most prominent and unique features that India has been bestowed with. A significant portion of this diversified population is comprised of the tribal people, the original inhabitants of the land. The tribal culture of India and their traditions and practices pervade almost all aspects of Indian culture. The Okhamandal region of Gujarat is no different. It is home to many tribal cultures and has nourished them from the very earliest periods of history. Living in an arid region where livelihood opportunities are hard to come by, these tribal communities have never known an easy life. But what they do know well is their magical art of mirror work and patchwork, a heritage handed down through generations. The stark monotony of the arid landscapes in this region is relieved by the bright shades of handicrafts made by the tribal women belonging to tribes like the Rabaris, Vaghers and Ahirs. The traditional skill of making exquisite handicrafts in mirror work, patchwork, appliqué and embroidery that these communities inherit from their forefathers has been an important part of their lifestyle, rituals and ceremonial ensembles for centuries. The most prominent tribe here, the Rabaris, are semi-nomadic and known for their survival and adaptation in the arid regions of Gujarat and Rajasthan. They follow a pre-agrarian, pastoral lifestyle found mainly in the Kutch and Saurashtra regions of Gujarat. They lead a quaint, colourful and rugged lifestyle which finds manifestation in the embroidery and crafts made by them. The colorful apparels, ethnic accessories and furnishings have a rustic charm, but with a contemporary twist. The objects they embroider highlight important events, rites and rituals and values in their lives. Rabari girls traditionally embroider blouses, skirts, veils, wall hangings, pillows, purses, etc.

In the absence of any other significant income-earning opportunity for these tribal groups, Tata Chemicals Society for Rural Development (TCSRD) realised the need to empower these groups to reduce their poverty and exclusion by providing them with a source of livelihood they are already well skilled in, i.e., to manufacture beautiful garments and artifacts in the traditional native art of mirror work, appliqué, patchwork and embroidery. Thus was born Okhai, a lifestyle brand, in 2002.

TCSRD plays a pioneering role in encouraging this handicraft art form. The Okhai initiative has not just generated livelihood, it has also empowered the women in the region. What began with a target of helping 200 women in the first leg, has at present, 500 rural women benefitting from this programme. This initiative is a powerful statement by the communities of the Okhamanda lvillages; a statement that empowers them; a statement that gives them and this region an identity; a statement that not only makes people notice this beautiful art form but also appreciate and patronise it.

Over the years, Okhai has expanded its reach to bring more rural communities in to its fold, beginning with Saurashtra handicrafts at Mithapur (Gujarat) to the rich traditions of the Karjobi art form of Babrala (Uttar Pradesh); the jute culture from Haldia (West Bengal); the weavers from Varanasi, and the Chikankari work from Lucknow. In the absence of incentives to continue the art, the elders in these communities are not in a position to promote it among future generations. With time, the unique art could be lost to the world but Okhai has allayed the fear of these art forms dying an unnatural death. Okhai strives to save their identity from getting lost in the long run. The exclusive apparel, accessories and furnishings from Okhai, in lively and unique designs, catch the fancy of an urban consumer immediately. The project, thus, has the potential to grow enormously and Okhai is sure to touch and brighten the lives of thousands of women from Okhamandal.

“Okhai has expanded its reach to bring more rural communities into its fold,beginning with Saurashtra handicrafts at Mithapur (Gujarat) to the rich traditions of the Karjobi art form of Babrala (Uttar Pradesh); the jute culture from Haldia (West Bengal); the weavers from Varanasi, and the Chikankari work from Lucknow” 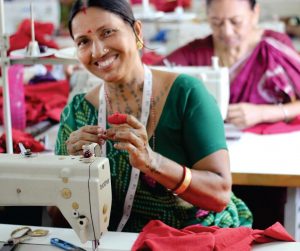 Okhai has made a significant contribution to the lives of the women artisans working with it and has been continuously facilitating them with various initiatives for the development of self, family and society, thereby improving their economic and social status as well.

The Okhai products are sold online and through the handicrafts centre at Mithapur, Gujarat. Okhai also holds sale-cum-exhibitions in corporate offices from time to time to promote the brand. With Okhai, the Company has been successful in making a remarkable difference in the lives of rural communities. It has not only helped them earn better livelihoods, but has also spread awareness about the traditional crafts of the region, thus helping preserve a rich part of the national cultural heritage for generations to come.

Tata Chemicals set up the TCSRD in1980 to promote its social objectives for communities in and around Mithapur, Gujarat, where its facility is located. This service was further extended to the communities in and around its Babrala and Haldia facilities. The Society works to protect and nurture the rural populations in and around Tata Chemicals facilities, and help people achieve self-sufficiency in natural resource management, livelihood support and the building of health and education infrastructure.

At 34, Rami Ben from the Okhamandal Taluka in Gujarat, is a self-made entrepreneur. She joined the Tata Chemicals Society for Rural Development (TCSRD) Self-Help Group (SHG) at Okhai in 2001 and was trained to make appliqué patterns. She is instrumental in making the arid landscape of the region don the vibrant hues of prosperity and self-reliance. As the master crafts person of the initiative, Rami Ben has been organising and motivating women from different tribes like Ahirs, Rabaris, Charan and other communities inhabiting the area, to use their craft to earn a livelihood and be financially independent. 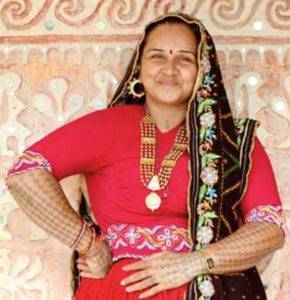 Understanding the market trends and customer preferences, Rami Ben has been actively contributing towards product development in Okhai by introducing new designs. She now leads a team that conceptualise and develop new designs and products, adding a modern angle to the traditional handicrafts that are marketed in Ahmedabad, Kolkata, Chennai, Pune, Mumbai, Bangalore and other cities.

Rami Ben’s decision to join TCSRD’s Self Help Group was a turning point in her life and marked the beginning of a journey towards self-reliance and financial emancipation not only for her but for several other women in a male-dominant social system. Her perseverance has not only changed her life but has also transformed the lives of hundreds of tribal women.

Rami Ben is today a veteran and a spokesperson, and is the key force behind the Okhai brand. 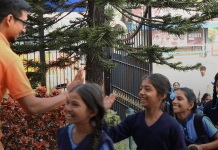 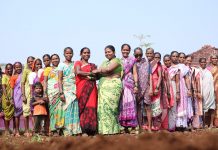