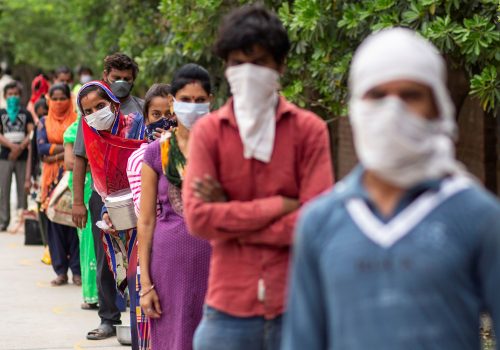 Pune, January 14, 2021: Haqdarshak Empowerment Solutions Private Limited (HESPL), organized an insightful webinar on ‘Social Security and Welfare During a Pandemic’, on January 11, 2021, as part of its 5-year anniversary celebration series. The webinar brought out how multiple government schemes beneficial for marginalised communities are not utilised due to lack of documentation, awareness, and institutional structure. It also highlighted how various facets of social welfare from education to healthcare are interlinked with poverty alleviation—the major problem which schemes aim to solve.

HESPL has an assisted-tech model, where a community field support agent— known as a Haqdarshak—uses its tech platform [via a smartphone] to discover eligible welfare schemes and documents for community members and then proceeds to provide the end-to-end application support with an objective of unlocking benefits.

The panelists at the webinar included Amit Garg, Livelihoods and Migration Expert, who moderated the session; Kachina Chawla, USAID; Priya Naik, Samhita; Shrayana Bhattacharya, World Bank; Safeena Husain, Educate Girls, and Aniket Doegar, Haqdarshak. The discussion, apart from highlighting the need of the hour to link the excluded population to basic social security, is also a call to action to private and public sector entities for efforts on their part in collaborating together for a common cause.

Speaking at the event, Aniket Doegar, CEO & Co-founder of Haqdarshak, said, “The ecosystem has started seeing government schemes not just as freebies but as an investment into the economy during the pandemic. While we use technology closely, scale in the last few years for us has been possible because of women groups and women entrepreneurs who provide last mile support and ensure that no one is left behind. Another observation is regarding our MSME vertical (which we started recently), where it’s been a surprise for us as well to see so many kirana shops, street vendors in metro cities not being aware of schemes, subsidies and not having access to basic documents.”

Giving her viewpoint, Safeena Husain, Founder and Director of Educate Girls, said, “When we talk about the poor and the socially marginalized, women are at the bottom of that pyramid. 40 per cent of out of school girls in India are present in 5 per cent of the villages. So, if a majority of the people do not have access to schemes that’s where you’re going to see the highest number of out of school girls. So, ensuring better access to social protective schemes coupled with education can break the loop of intergenerational poverty.”

During the webinar, a need was identified to make the digitisation of scheme linkages process faster and design custom made solutions for each sector. Other aspects that emerged in the form of possible solutions include better liaising of all stakeholders, strategic investments for a resilient economy, better utilisation of data available in the public domain, and need for setting up a Ministry specifically for the funds allotted under the schemes passed by Government. This may help in easy liaising for various bodies like NGOs, civil societies etc. to have a common point of access and also for holding accountability.

Shrayana Bhattacharya, Senior Economist at the World Bank, said, “There has been a change in the way we talk about Social Protection. Until 2 years ago they were thought of as hand-outs or doles, but the pandemic has made it clear to various stakeholders in the policy making process that these are strategic investments in people’s lives, we need to ensure them, not just for the sake of equity but for the economy to be resilient. Especially in a country like India, where 80 per cent of the population earns less than $5 a day.”

Adding her thoughts, Priya Naik, Founder and Director of Samhita Social Venture, said, “The pandemic has made corporates realise that social security is not only the right thing to do but the smart thing. Overnight a host of companies realised that the govt has allocated significant budgets to support vulnerable communities and small amounts of money that can be spent on unlocking these scheme benefits can actually result in short-term and long-term impact.”

Kachina Chawla, Senior Strategic Information Advisor at USAID, said, “USAID’s relationship with the Government of India really has transitioned from being that traditional donor to being a trusted partner. When it comes to working on COVID-19, we extend this relationship to work on four E’s. Firstly, we engage different players who may not traditionally be engaged in this response, such as the private sector. The second E is Elevate – we use the best of science and technology to expand the government’s ability to respond most effectively. And the third E is about expanding the existing machinery and making sure that routine services are uninterrupted. And then the last E is about remaining ethical and being inclusive. Behind every data point is a person and we can never lose sight of that.”

The discussion was moderated by Amit Garg who brought to light the pain points and how everyone could collectively work towards finding answers to the impending questions. The discussion was followed by an insightful Q and A session with the panellists to answer some of their pertinent queries asked by the attendees like the “Implementation of Universal Basic Income” or “Quasi-income schemes and their feasibility in the social protection gambit”. Shrayana Bhattacharya explained that Quasi-income schemes such as KALIA in Odisha are feasible only if they are consolidated. There are 390 such schemes at present and there are clear budget constraints. Hence the solution lies in not creating the next new scheme but rather consolidating these schemes together. Many States are already consolidating these funds and testing this process which makes it a positive trend.