Mumbai, March 20, 2020: Whenever there has been a crisis in the world, musicians have always stepped in to resonate their voices and catapult it into a movement. One of history’s biggest moments has been the creation of the ‘We Are the World’ project, where various artists came together to unite to raise funds for the famine in Africa.

Back home, at a time when it is imperative to focus on water-stressed villages of India, a strategy that will further impact agriculture and local economic growth, IdeaHive Media, an agency focusing on creating social impact projects, partnered with Watershed Organisation Trust (WOTR), as its knowledge partner, who has pioneered in watershed efforts, both directly and through partner NGOs in 3,500 villages across eight states of India to create a national water movement called Paani ka Teeka.

The project has brought together the music industry to join hands and create a ‘We are the World’-like initiative to bring support to 1000+ water-stressed villages. Paani Ka Teeka’s project goals include Integrated Watershed Management including livelihood creation and behavioural change. The project aims to raise support through CSR, philanthropists and global grants to work closely as public-private collaboration and bring impact to water stressed villages of India.

An inspiration called Kumbharwadi, is one of the many successful stories of a water stressed village that was transformed by Paani Ka Teeka’s knowledge partner – WOTR.

Kumbharwadi in 1998 – A Bleak Scenario 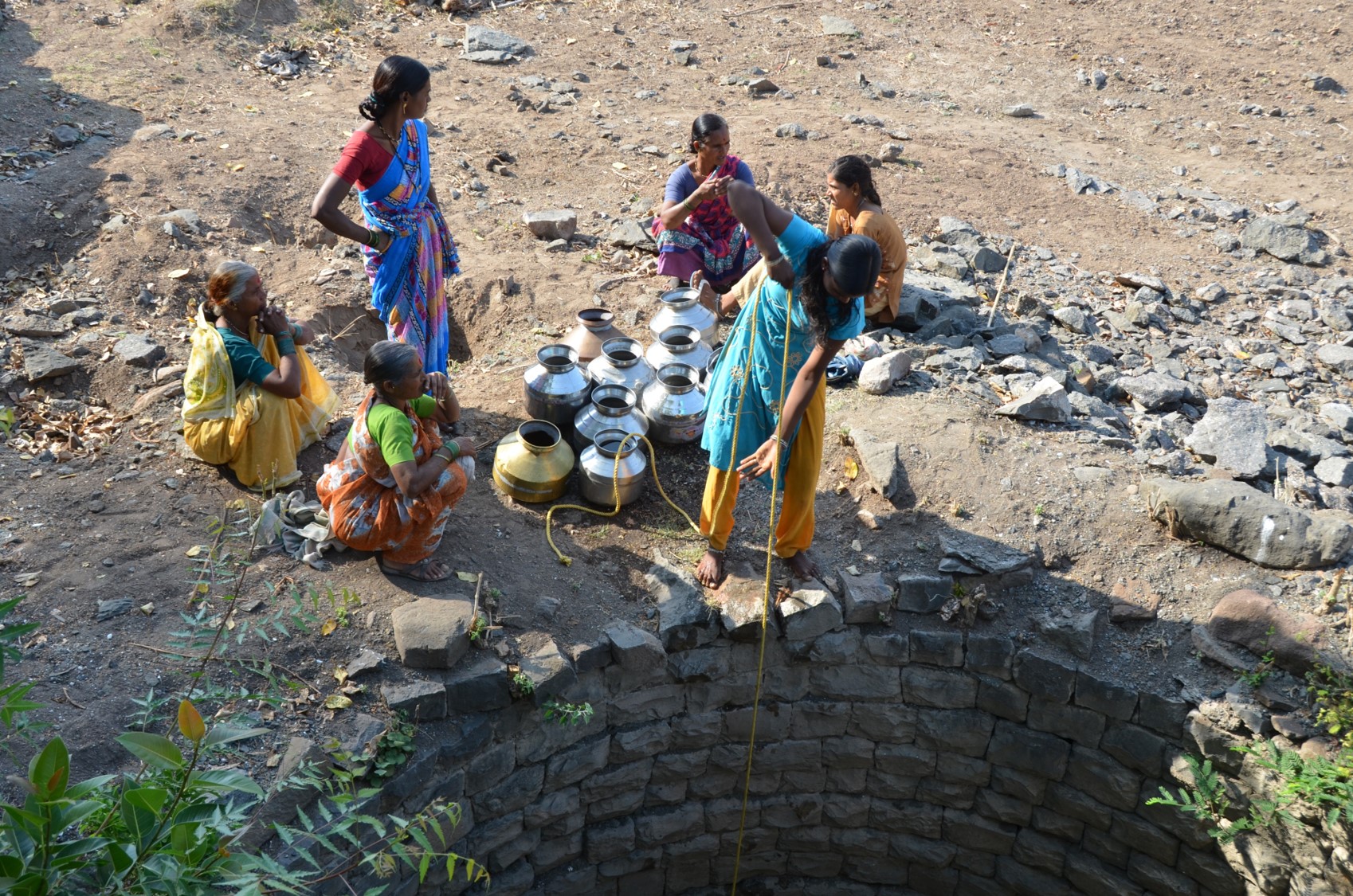 Year 1998. All the 171 households in the village and the livestock in the village depended on just one well for their drinking water and other domestic needs. In summers, this lone well would often go dry and villagers depended on 25-30 government supplied water tankers in a year to meet their domestic needs. While the average annual rainfall in the village is around 476 mm per year (contrast this with Maharashtra’s overall average of 1,000 mm), in a year of drought, which was and is a regular feature, it can come down to between 150-250 mm.

Even in times of good rainfall, agricultural production could suffice for just five to six months. Farmers cultivated rain-fed subsistence crops such as pearl millet during the monsoon, and sorghum in winter. During the rest of the year, this degraded landscape and low levels of agricultural productivity forced its inhabitants to migrate to brick kilns and neighbouring cities like Pune in desperate search of wage labour. Drought was a regular phenomenon.

In this bleak scenario, the people of Kumbharwadi observed the work being implemented in the neighbouring village of Darewadi and could see the many positive impacts of watershed development on the social and economic life of that village. Darewadi, which hitherto experienced severe water shortages, had been transformed by watershed development; water shortages were no longer an issue even in summer. This convinced Kumbharwadi that it could be the answer to their problems as well. At their request, in 1998, the Watershed Organisation Trust (WOTR) initiated a watershed development project (WSD) in Kumbharwadi as a means to conserve soil and water along watershed lines; to recharge ground water aquifers; catch water across landscapes; and build resilience of the livelihoods resource base.

The primary objectives of WSD in Kumbharwadi were to increase water availability, income, productivity and livelihood security; strengthen the indigenous resource base of land and forests and promote women’s empowerment and gender equity. It was one of WOTR’s earliest participatory watershed development projects. 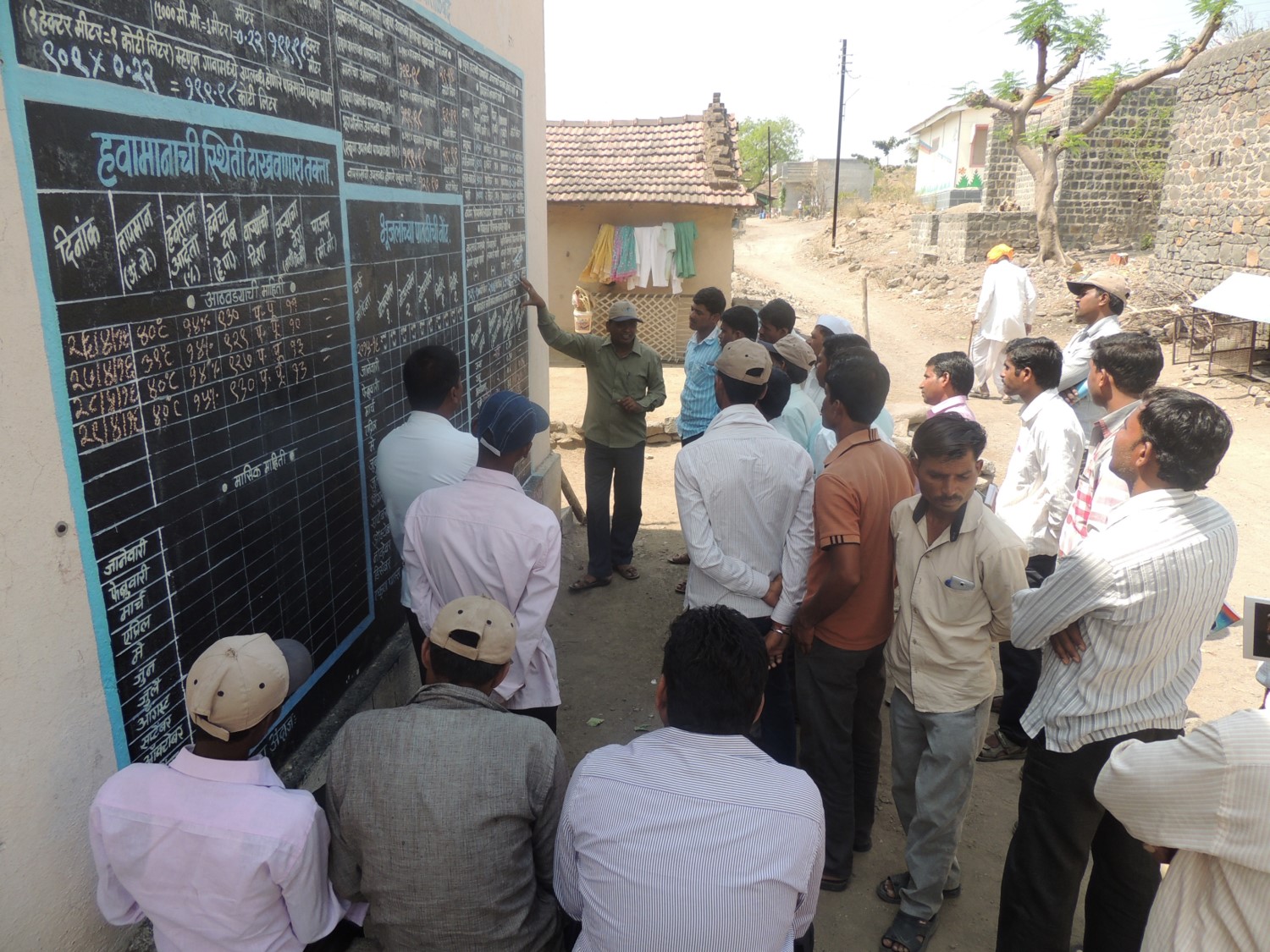 The first phase of the project started in 1998 and successfully finished in 2002. WOTR remained in contact with the village through informal ad-hoc visits and visitors  interested to see the on-ground impact of WSD.  In the next phase, between 2012 and 2017, in order to build resilience to climate change, WOTR undertook compartment bunding on 130 ha, constructed three earthen nallabunds, two check dams and ten farm ponds with the aim of conserving water and recharging the water table.

Under the Water Stewardship Initiative (WSI) launched in 2015 to enhance water impounding capacities, and increase water use efficiency, an additional six lakh litres of additional water storage capacity has been created by desilting a check dam and two crore litres of water been brought under collective management. 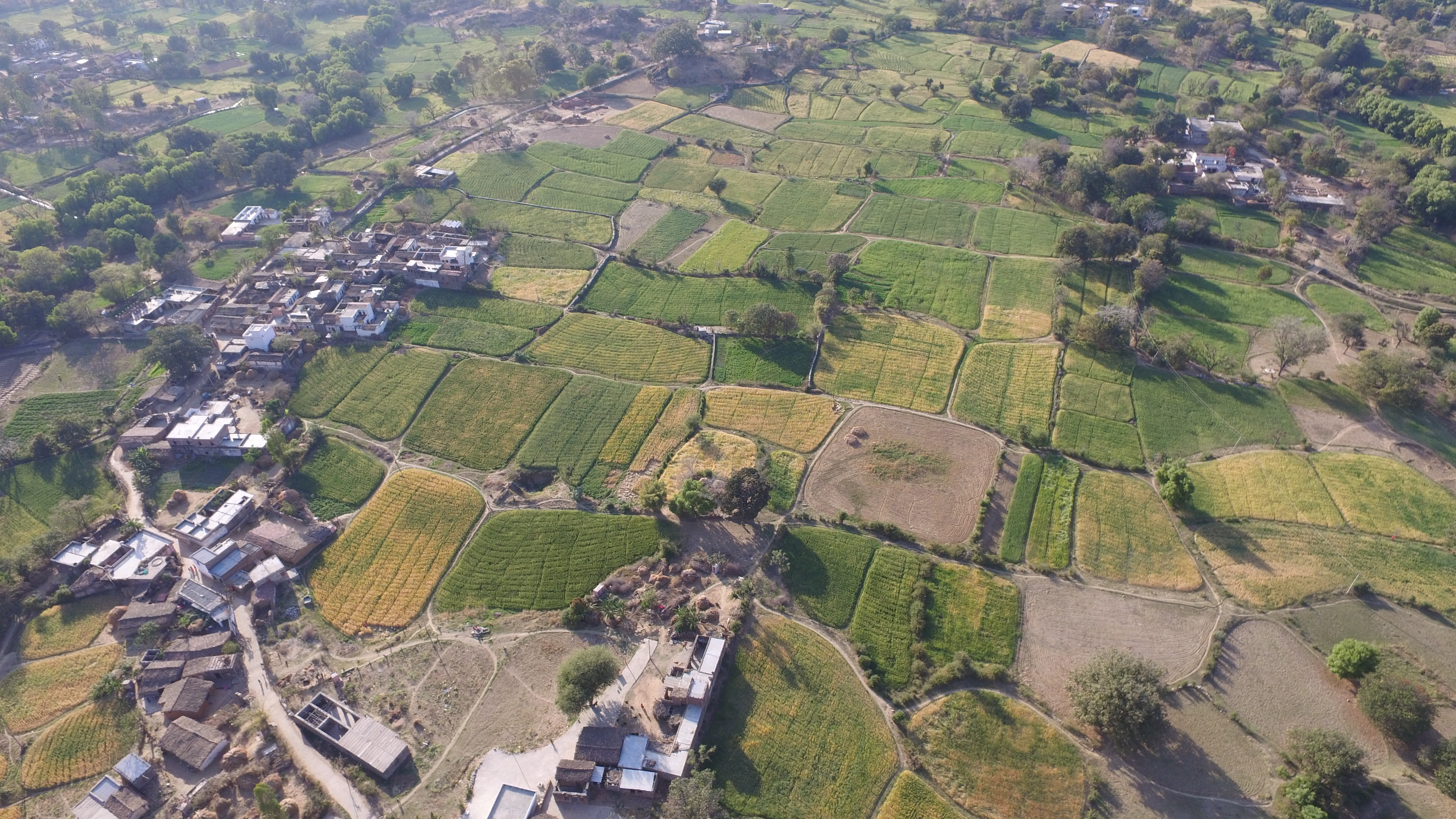 Follow-up impact assessments that were carried out in 2002 and August 2018, show dramatic and sustained improvements in many aspects of life, post the watershed development work. In particular, land productivity, income, standard of living and land use patterns have all improved. The following Table brings out the visible impact of WOTR’s work on the water availability and agricultural scenario in Kumbharwadi. These statistics are based on focused group discussions.

Social and Economic Impacts: Income and Standard of Living

Watershed development has also substantially improved economic and social indicators, including quality of life. The following Table shows the impact on ownership of assets, dairy production and daily wages paid for agricultural labour.

Paani Ka Teeka’s vision is to transform a 1000+ Kumbharwadi like villages through integrated watershed development with the support of its knowledge partner, WOTR and to amplify this cause, what could be more apt than getting the support of musicians to create a fund raising movement within the country and talk the language of water through the platform of music. Paani ka Teeka has the support of the legends of Advertising and Music – Piyush Pandey and Louis Banks who are reuniting after the iconic ‘Mile Sur’ anthem and have garnered the support of music industry leaders like Zakir Hussain, Shankar Mahadevan, Shreya Ghoshal, Shaan, Vishal Dadlani, Harshdeep Kaur, Neha Bhasin, Pankaj Udhas, Salim Merchant, Sivamani, Mame Khan, Rakesh Chaurasia, among others to join hands with the campaign for water consciousness. A series of music-led projects is scheduled in the last two quarters of 2020-21.

Paani Ka Teeka has partnered with Watershed Organisation Trust (WOTR) as its knowledge partner, National Environmental Engineering Research Institute (NEERI), Ashoka Trust for Research in Ecology and the Environment (ATREE) and Emergy Enviro (A SINE IIT Bombay Company) as its Advisory and Technical partners who will work closely to make this project into a national movement.

Ayiye Hum Sub Saath Milkar, Iss Desh Ko Paani Ka Teeka Lagayein!! With a patriotic line for water as its signature line…Paani Ka Teeka is probably the answer to India’s ‘We are the World’ movement.

“It’s a blessing to be able to get the support of industry leaders and domain experts who have believed in our vision with Paani ka Teeka. The objective of the campaign is to make this project a citizens’ movement and work towards a water-secure India,” said Dilip Moorkoth, Founder Paani Ka Teeka and the Director of IdeaHive Media Pvt Ltd.

“We are delighted that integrated watershed management which has helped transform many villages, will now enter a new phase with support coming in from India’s leading artists who have come together to extend support to the water stressed villages of India.  We are happy to collaborate as knowledge and implementing partner with the vision of Paani Ka Teeka and we look forward to this exciting journey in the times to come,” said Crispino Lobo, Co-Founder and Managing Trustee Watershed Organisation Trust (WOTR).

Ad Guru Piyush Pandey said: “Water is critical for life and I’m very happy to collaborate with ‘Paani Ka Teeka’ and Louis Banks to make a small contribution and spread awareness in India about the necessity of saving water. I am honoured to be a part of this journey.” 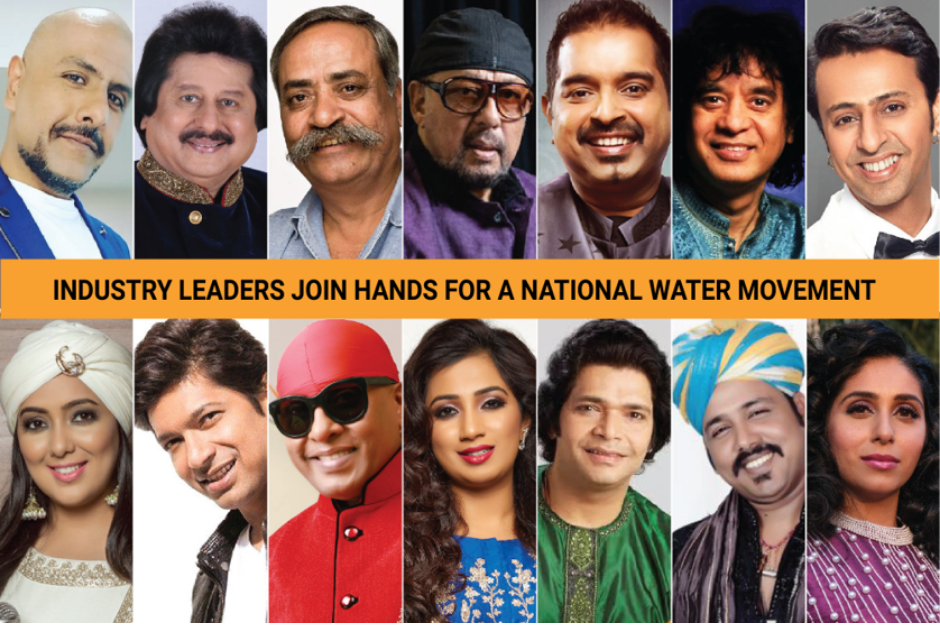 “Music has the capacity to bridge cultures and create a momentum. If you look back in time, artists have always risen to the times and needs of the nation. It gives me utmost pleasure to come together along with my music industry friends and to team up yet again with Piyush Pandey. The vision created by IdeaHive for the Paani Ka Teeka project is definitely a great roadmap to a national water movement,” said veteran musician Louis Banks.

“A ‘We Are The World’-like story for India is a great idea for building a national water movement. I am glad to be a part of Paani ka Teeka’s vision, as the entertainment industry joins hands to be the voice for the most precious thing in the world today – Water,” said Salim Merchant.

“Over the last few years we all have started witnessing changes in the weather pattern. During such challenging times, it is our responsibility to stand up for the cause of water conservation. PaaniKaTeeka is a step in the right direction and I’m happy to work closely with PaaniKaTeeka and spread the message of a need to secure this precious gift of nature,” said Shaan.

“I’m happy to be part of PaaniKaTeeka’s vision for a national water campaign, I am positive that the energies of the music industry and the domain experts together will go a long way in building this into a Water Positive India,” said Vishal Dadlani.

“We need to start planning not only for us, but for the future generations as well and music is just the right medium to connect us all as a nation to work towards a common goal. I’m very excited to be associated with Paani Ka Teeka’s vision, and together, and I’m positive that we have set on the right track with this national movement,” said Shreya Ghoshal.

“Music has always connected generations towards a cause. Water needs the attention of us all. I extend my full support to the campaign, and having seen the plans, I’m more than happy to be part of this historic project. I sincerely hope our joint efforts are able to bring a huge impact to the cause,” said Pankaj Udhas.