“When you let your own light shine, you unconsciously give others permission to do the same.”– Nelson Mandela

Every once in a while, a bright light appears in the sky, shining and leading the way as an example for others to follow; for others to see. With deep conviction towards a cause, daring to evoke change, sacrificing time, energy, family and comfort for the greater things they believe they need to do to bring about overall change in society; giving life greater significance. 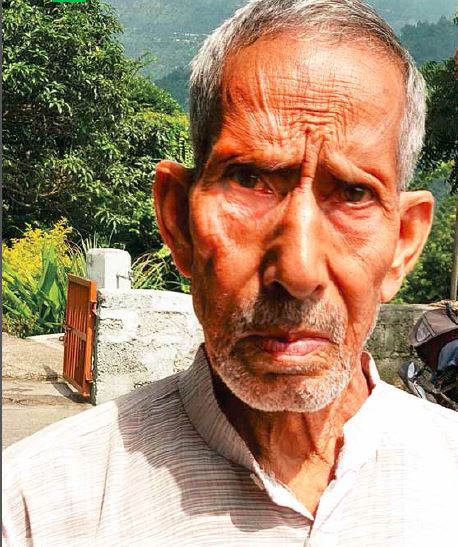 Meet 79 year old Shri Dhoom Singh Negi. He hails from Pipaleth village in the Tehri Garhwal region of Uttarakhand. A passionate social worker, he is one of the pillars of the people’s environmental movements in Uttarakhand and the Himalayan region.

A true Gandhian warrior, Negi is a confluence of an activist, sensitive writer, agriculturist, soldier, scientist and a sociologist who works with unwavering commitment. He contributed greatly to the Chipko Movement and later movements related to environment protection.

Guruji, as Dhoom Singh Negi is popularly known, was born in a moderate family. After completing his primary education, he went to Delhi and Kolkata to earn a living to support his family. When he returned to his village from Kolkata, he found out that there was need for a teacher, so he decided to take the job on a temporary basis. He worked as a primary school teacher in Manjiyadi village, Uttarakhand, and later on, he was a junior high school headmaster in Jajal. With the surroundings and the community being his laboratory for teaching and awakening, Dhoom Singh took the school to new heights.

In the mid-sixties, Dhoom Singh Negi participated and took along his students to old Tehri town for a dharna to impose liquor prohibition in the area. This resulted in them being jailed, but it did not deter him from the conviction in his heart to stand up against issues that are harming the society. He encouraged his students to take part in the cause of social reforms. He was confident that the new generation will emerge as nation builders. 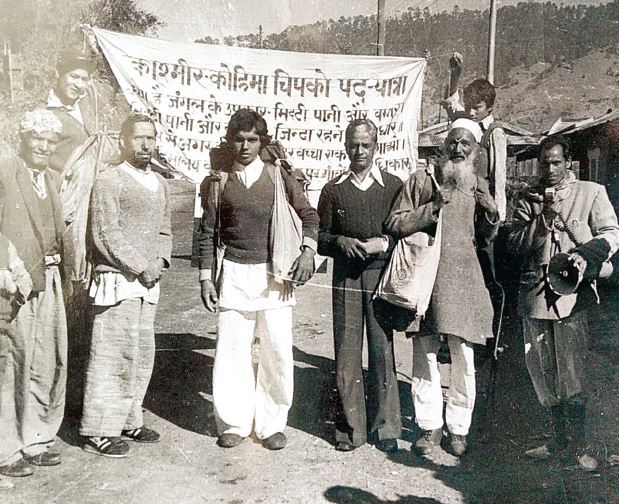 The turning point in his life came when environmentalist and father of the Chipko Movement – Sundarlal Bahuguna along with eminent people of the Sarvodaya fraternity, started visiting schools. (The Chipko Movement began in Chamoli district of Uttarakhand in 1973). Bahuguna also visited the school Negi was teaching. It was through him that Negi was inspired and influenced to become a social worker. Negi took part in Gram Swaraj (Village Self-rule) of Gandhiji-Vinobaji, and actively participated in the many programmes of social transformation. 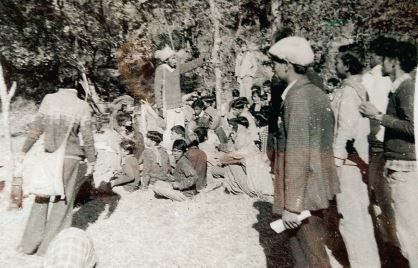 Negi later gave up his teaching profession to dedicate his life for a social cause. He joined the Sarvodaya Movement and became a committed Sarvodaya volunteer. Dhoom Singh Negi’s Gandhian approach to look at the world around him made him an active participant in the various activities. He encouraged women to be in the forefront of the movement and was instrumental in forming Mahila Mangal Dal in the surrounding villages. He helped develop a new generation of people by sensitising women and youth. In 1974, Negi was made the Joint Secretary of the Chipko Movement. Alcoholism, untouchability, deforestation – were issues that were part of Chipko. He extraordinarily and extensively sensitised and mobilised the people on these issues. 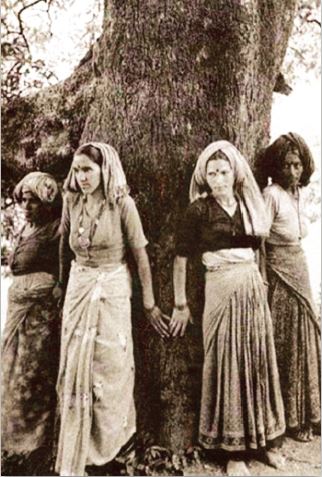 Risks to life became a part of the norm. A prime example of this was in December 1977 when the auctioned forests of Adwani, Narendranagar, Tehri Garhwal District, were to be commercially felled despite public discontent against it. Large groups of women led by Bachhni Devi came forward to save the forests. Interestingly, Bachhni Devi was the wife of the local village head, who was himself a contractor. Dhoom Singh Negi and his volunteers went to support the women’s struggle against this action and started a fast in the forest itself. The officials withdrew then. A second attempt was planned by the contractors on February 1, 1978 with the help of two truckloads of armed police. When Negi got wind of the plan, he and his volunteers reached the forest. By the time the police and contractors arrived, they witnessed a sight never seen before. Each tree was being fiercely guarded by three volunteers. Whenever the designated labourers approached a tree with their axes, the activists would sound their drums and shouted slogans. They held on tightly to the trees even as the axes glitter in the sunlight. Seeing the determination of the volunteers, the police made a hasty retreat. The activists were willing to face the lathi or bullet to save the forest. His dedication, advocacy and perseverance eventually led to banning of tree-felling above 1000 meters.

There were many instances when his life was at risk defending and prohibiting the commercial felling of trees.

Negi encouraged and promoted tree plantation for forest conservation in the Himalayan region. Nurseries were set up to distribute saplings/plants to the villagers. Plants fulfilling the five F’s viz. Food, Fodder, Fertiliser, Fuel and Fibre, were planted. Till date, 90 percent of these trees are still surviving.

“It is not the critic who counts; not the man who points out how the strong man stumbles, or where the doer of deeds could have done them better. The credit belongs to the man who is actually in the arena, whose face is marred by dust and sweat and blood; who strives valiantly; whoerrs, who comes short again and again, because there is no effort without error and shortcoming; but who does actually strive to do the deeds; who knows great enthusiasms, the great devotions; who spends himself in a worthy cause; who at the best knows in the end the triumph of high achievement, and who at the worst, if he fails, at least fails while daring greatly, so that his place shall never be with those cold and timid souls who neither know victory nor defeat.” Theodore Roosevelt 25th President of the United States.

Thus arose a movement – Beej Bachao Andholan (BBA) in the late 1980s, led by farmer and social activist – Vijay Jardhari. The Andolan started in Jardhargaon village of Tehri district of Uttaranchal, famous for its unique movement to save the traditional seeds of the hills. This movement is not only a crusade to conserve traditional seeds, but also to promote agriculture and local tradition. 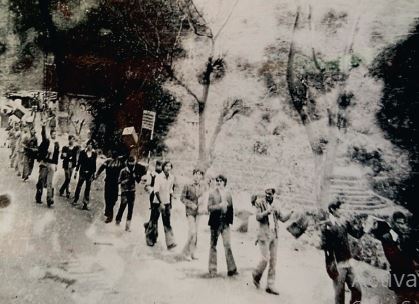 Such forest satyagrahas took place in regions where survival of the local population was intimately linked with access to the forests, as in the Himalayas, the Western Ghats, and the Central Indian hills. Himalaya forest resources are the critical ecological elements in the vulnerable Himalayan ecosystem. The natural broadleaved and mixed forests have been central in maintaining water and soil stability under conditions of heavy seasonal rainfall. They have also provided the most significant input for sustainable agriculture and animal husbandry in the hills. Undoubtedly, the forests provide the material basis for the whole agro-pastoral economy of the hill villages. Green leaves and grass satisfy the fodder requirement of the farm animals whose dung provides the only source of nutrients for food crops. Dry twigs and branches are the only source of domestic cooking fuel. Agricultural implements and house frames require forest timber. The forests also provide large amounts of fruit, edible nuts, fibres and herbs for local consumption. (Excerpt from: The Evolution, Structure, and Impact of The Chipko Movement By Vandana Shiva and J. Bandyopadhyay)

Sharing his thoughts, Negi says, “I believe that humans have a lot of potential, a lot of possibility inside us. We just need to look inside ourselves to see what we can do, how much we can achieve, and what is our potential.”

Dhoom Singh Negi did a deep study on the forests in the Himalayan region. He witnessed, and was concerned about the bonded forest labourers that were deprived of their rights by the forest contractors. This led to him working for the rights of the labourers. He wrote many articles on people’s rights on forest and natural resources as a source of livelihood.

Negi also led the movement against illegal resin tapping as it was weakening and causing permanent damage to the trees. His Satyagraha was to oppose the illegal system and injustice based on science and ecological conservation. “Trees are our brothers. Injury caused to them has to be treated and cured.” This ideology resulted in the State Government’s decision to ban illegal resin tapping and resin collection.

“The forest is a gift to us, and the soil, water and pure air are the gifts the forest has given us. It is our only means to stay alive. Save us from being looted. We managed to save our forests and even the government agreed to our plea of not cutting down the forests. Our fields, our soil are getting degraded and we need to improve them. Our seeds are disappearing. The Green Revolution took away our seeds from us. We wanted to save our seeds and we had a lot of it” – Dhoom Singh Negi

Between 1980-1982, Dhoom Singh Negi participated in a 300 day Padyatra of 4800 kms covering places across Jammu & Kashmir, Himachal Pradesh, and areas that are now part of Uttarakhand, and Nepal. The mission was to sensitise the government and people about the denuding Himalayan forests and its severe ill-effects. 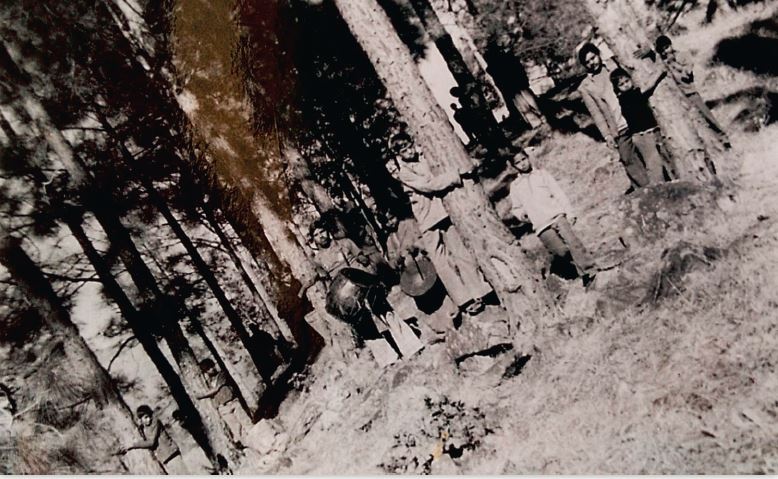 In 1989-90, he actively participated in the Anti-Tehri Dam Movement. He was the President of Tehri Garhwal Sarvodaya Mandal. Post 1990, he became an active participant of the Seed Protection movement. His work for liquor ban, anti-mining and Greening Himalaya and related constructive works to save the mountains made him a veteran Sarvodaya worker.

Apart from being a social and green activist, Negi is also a proactive writer. He has published articles in local newspapers and magazines to enlighten the people on the various social issues and needs.

Dhoom Singh Negi’s voluntary work has been consistently going on for over four decades. An effective mobiliser and motivator, Dhoom Singh Negi’s dream is Gram Swaraj and self-respect for all. He is a Satyagrahi, a devotee of Sarvodaya, social reformer – all in one – who has sacrificed his life to Mother Nature and the people’s cause. His life mantra is that the Himalayas and the forests have to be saved. His values and actions have been revolving around community mobilisation making people realise the importance of collective responsibility in solving their own problems. 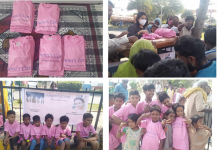 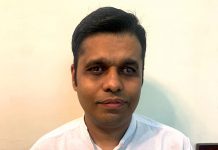 Rahul Kelapure: On a Mission to Empower the Disabled to Make Informed Financial Choices 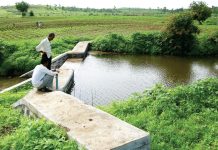